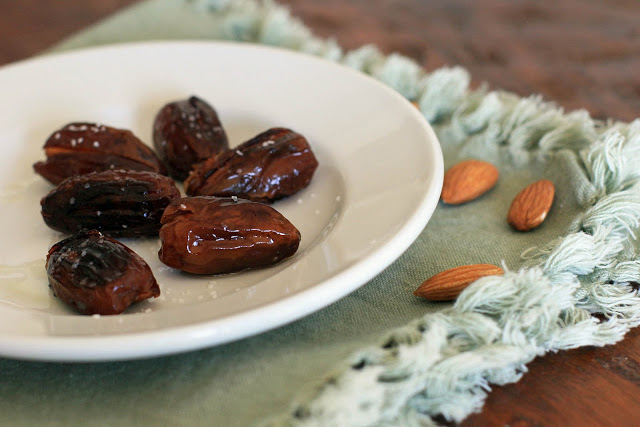 If you’ve never had a bacon wrapped date before, you owe it to yourself to try one as soon as possible.  The version that’s stuffed with blue cheese is great, but I like almond filling even more; the almonds provide a really nice crunch and texture.  I once brought several trays of them to a potluck BBQ; at first people were hesitant to try them since they thought the combination sounded odd.  Well my friends, they were things gone and people are still talking about them to this day.

But what if you’re a vegetarian or vegan?  No worries, this bacon-free version gets the job done.  Pitted dates are stuffed with almonds, sauteed in a little olive oil and then get a hefty sprinkle of sea salt.  You get the warm, soft sweetness of the dates, the crunch of the almond and the sea salt gives you that salty contrast.  The fact that you can make these so much quicker than the bacon-wrapped version is both a blessing and a curse… I have a feeling I’m going to be making these pretty often from now on. 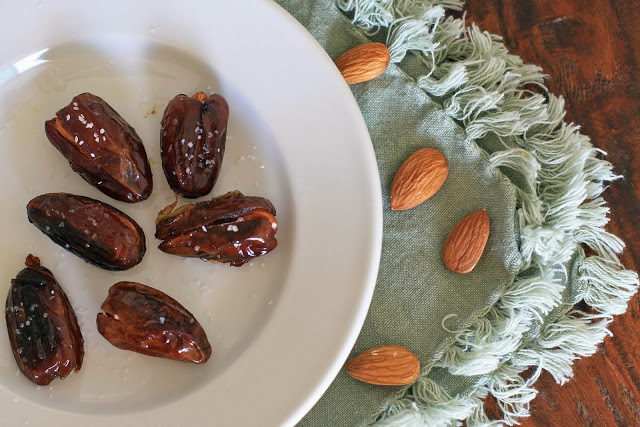 Gently stuff the pitted date with a whole almond. Repeat with as many almonds and dates as desired.

Heat a very thin layer of olive oil in a large skillet over medium heat. Place the stuffed dates onto the skillet. Cook on one side until the dates has softened and darkened a bit. Flip to the other side and again cook until the other side has darkened slightly.

Remove to a serving platter and sprinkle generously with sea salt.