How to make Homemade Mayonnaise

Electric can openers have become so ubiquitous that we hardly pay them any attention anymore. They’re usually a device that sits alone on the counter and we don’t even consider their existence until it’s time to open up a can of peas or carrots. After reading this guide, however, we predict that is going to change. That’s because we not only reviewed the best electric can openers, but we also wrote a guide that will help consumers in their endeavor to find the best ones for their home. So if all of that sounds alright to our readers, we would like to jump right into this article.

This sleek black electric can opener should be on every consumer’s shortlist. That’s because this model is not only well built, but it looks good while it does its job. This model does an amazing job of opening cans, and because it cuts the can’s lids off at the sides, it doesn’t create annoying sharp can lids that can cut the user.

This also means that the blade doesn’t come into contact with the contents of the food, so there isn’t any possibility of food contamination. It’s also a model that can be used with one hand easily, which is a plus for most people trying to cook a meal for their family. And because the lid stays shut until the consumer lifts the lever, there aren’t any annoying spills to deal with while opening a can.

It’s also worth mentioning that this can opener doesn’t take up a lot of counter space either. It’s only 10.5-inches tall, 4.7-inches wide, and 5-inches deep, so it fits just about anywhere the consumer needs it to fit. It’s no wonder that it’s so popular. With that being said, this can opener isn’t without its flaws—or should we say flaw.

The one thing we didn’t like about it was that if the user performed more than one revolution around the can, then it could potentially create metal shavings. And this can be a problem who just wants to set the can in the opener and let it run while doing other things. For most people that isn’t a big deal, but it is worth thinking about before purchasing.

When we reviewed this hands-free electric battery opener, we knew that not everyone is going to love it. That’s because it’s a small model that’s meant for small to average size cans. In other words, it’s not going to do a great job on that family size can of kidney beans or canned chili.

However, for average-sized cans, this model works pretty well. Once it’s placed on a can, all the consumer has to do is touch it and it will begin to open the can automatically. No need for the user to hold on to it or guide it through the opening process. If it’s properly placed on the can, it’s going to work extremely well.

This model only requires two AA batteries to work and it doesn’t eat through batteries the same way that other battery-powered openers do. Another thing that we liked about this model was that it produces zero sharp edges. It’s capable of doing that because it doesn’t cut the top of the can like an ordinary can opener but instead cuts the side of the can underneath the rim. When it has finished, the consumer simply has to remove the can opener and the lid goes along with it. And because of its small size, this electric can-opener can simply be placed right into a kitchen drawer for later use.

The beauty of this Cuisinart Deluxe can opener is not its features, but the impact this model has on a person’s budget. This model is very inexpensive as compared with other quality electric can openers, so it’s good for budget-conscious consumers. Now, don’t get us wrong. Just because this model doesn’t have a whole lot of features doesn’t mean that the features it does have aren’t impressive. After all, this model does do a great job of opening cans, all thanks to its power-cut blade and its powerful motor system. Other features worth mentioning are this model’s removable activation lever and its ability to be easily cleaned.

Another thing that impressed us about this model was that it could handle any standard size can quite easily. We had no problems opening up little cans of tomato paste or a big can of stewed tomatoes. And it worked every single time we used it without a problem. Unfortunately, we’ve found that no product is without its flaws, and this can opener is no exception. One of the things we didn’t like about it was that it had a cheap feel to it, and it didn’t feel very durable, although we didn’t experience any problems with it while we were using it. Another thing we didn’t like was its short power cord. Most can openers have a 24-inch or larger power cord, and this one only had a 16-inch one.

One of the first things that are going to catch anyone’s eyes when they first look at the electric can openers from Kitchen Mama is that they’re available in a variety of different colors. These colors include purple, red, or green. But these can openers are more than stylish looking, they actually perform pretty well. Once they’re placed on a can and their buttons are pressed, they go right to work opening the can. And they open the can quickly and without leaving a jagged can lid. That’s because they cut underneath the lid from the side, so when the consumer lifts the can opener the lid comes with it. This means no mess, no fuss, and a safer can-opening experience.

We also like the fact that this model has an ergonomic lever that makes it easier for consumers to hold, even people who may be suffering from arthritis. Unfortunately, it’s not all sunshine and rainbows with this can opener because we did have a complaint or two about it.

One of the first complaints we had about it was that it costs slightly more than other hands-free models, but fortunately only by a little bit. Another thing we didn’t like about it was that its magnet wasn’t very strong, and this can be a problem for people who need to open larger cans. However, even with those flaws, we do have to say that this hands-free opener is still better than most of the other models available.

A Guide To Electric Can Openers

Most people don’t give much thought to the electric can opener they’re buying because they probably believe that these devices aren’t all that complex, so no serious thought isn’t needed to buy one. Unfortunately, that’s simply not true. There’s a lot more to consider when purchasing one of these models to ensure that the model brought home is going to live up to expectations. In this guide on electric can openers, we’ll talk about some of the things that consumers need to think about before putting their hard-earned money down on a new model. Before we do that, however, we would like to start this article off with a bit of a history lesson on the origin and evolution of can openers throughout the years. 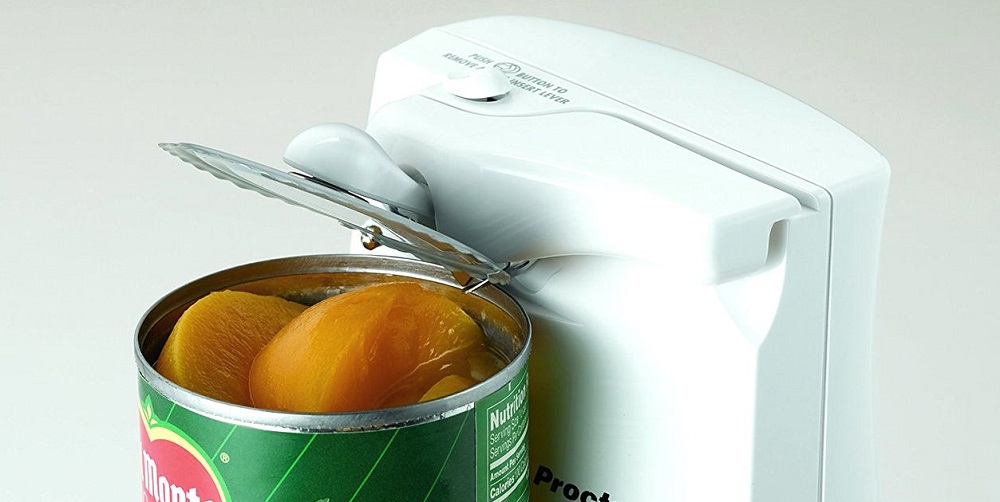 The History Of Electric Can Openers

What most people don’t realize is that the first tin cans were invented long before can openers were invented. Cans were around for fifty years before someone would invent a can opener. Why did it take so long? Well, there are several reasons why it took 5 decades for the can opener to show up, but to explore those reasons we first have to consider why cans for food were invented in the first place. And to find the origins of food cans, we have to travel back to 1795. This is when Napoleon Bonaparte offered a bounty to anyone who could come up with a food preservation method that would keep his army’s food safe. This call would be answered by Peter Durand, who received a patent from King George III to make what many consider to be the first can. This can wasn’t just a tin can, however, it was a can that was made of a combination of iron and tin. Metal that was 3/16th of an inch and was very tough to open. Anyone who opened one of these cans would need a hammer and chisel just to get through the tough metal; A proposition that we’re sure was messy, clumsy and very difficult. Even if the modern opener had been invented, it wouldn’t have been able to cut through these cans.

Fortunately, these early iron/tin cans would be replaced by steel cans and these cans had characteristics that made them easier to open. Since steel is thinner and easier to cut than iron cans, it wouldn’t be long before somebody invented a can opener that could accomplish that very feat. And that person was Ezra J.Warner, a man who patented the first can opener on January 5, 1858. His invention featured a blade that cut into the can’s lid and it also had a guard that prevented it from puncturing the can. This enabled the user to hack their way around the can’s edge. It was crude, but it was quite effective. Unfortunately, the public didn’t like it very much, but it did see quite a bit of use by the U.S Army during the Civil War.

During the late 1860s and early 1870s, the design of the can opener would be improved and they became closer to the ones we use today. By the roaring 1920s, the crank design manual openers were invented, and this manual opener would be the same manual opener that we see nowadays. During the 1930s, the first electric can openers began to be developed and these were modeled after the manual cutting-wheel design openers. Unfortunately, these weren’t very popular with the public, so these models eventually fell out of favor. Fortunately, electric can openers were reintroduced in the mid-1950s. And ever since then, these models have continued to evolve and improve.

What To Look For When Buying An Electric Can Opener

Now that we’ve completed our little history lesson, it’s time to talk about how to buy the best electric can opener possible. Fortunately, the process isn’t too difficult and we can sum up some of the most important aspects to consider in only a few lines.

The first thing that consumers should think about is how safe the electric can opener is to use. Although there are plenty of models that cut through the top of the can, which ends up producing a jagged can lid, there is an increasing number of electric models that cut cans safely. These models don’t cut through the lid of the can but cut underneath the lid. This allows the can’s lid to be removed without creating a jagged lid edge. We feel that these models are safer, so households with children might want to push these models to the top of their shopping lists.

Choose Between Counter-Top Or Hands-Free Models

The next thing to consider is whether a countertop model or a hands-free model is needed. In our opinion, both of these models do a great job, so it’s really up to the consumer to think about which one they prefer before they buy one.

Other Features To Consider

And finally, below are some other features that consumers might want to consider before buying their next electric can opener.