There was a point in time that we would’ve written off salad spinners as just another kitchen gadget that we would find useful for a while and then end up placing it into a cabinet and forgetting about it. And then we tried a few out and realized that they weren’t just another gimmicky kitchen tool but had practical and tangible real-world uses. We also discovered that it was a tool that we used almost daily—yes, it’s that useful.

We became so enamored with these spinners, that we decided to test out a few more of them to try and find the best ones possible. We tried budget models, premium models and just about every model in between. When we finished, we knew which models were just okay, and which ones were truly the best salad spinners. Information that we’re now going to share with all of our readers.

The biggest problem that many people have when they prepare a salad for dinner is making sure the lettuce is adequately washed and dried. The old-fashioned way of doing this is by running the lettuce under the tap and then trying to furiously shake the lettuce until it’s dry enough to use, but that’s an ineffective and inefficient method of doing things. Not only does it take more work than it should, but the lettuce hardly ever comes out dry. That’s why we were quite happy to find this salad spinner and give it a test run. It’s a model that’s designed by Mueller Austria, so we expected it to provide us with the features we needed, and we weren’t disappointed.

The first thing worth mentioning about this salad spinner is that it’s quite large. It’s easily one of the largest models we’ve seen and has a capacity of 5-liters, which is a significant size improvement over the models that only had a 3 or 4-quart capacity. This size allowed us to place a large amount of lettuce in it and do it without burdening its spinning mechanism. Another thing that intrigued us was that this lid fits securely on the model and it had vent holes that allowed us to pour water out of the unit and do it without worry about lettuce going with it. That allowed us to soak vegetables thoroughly before we spun them dry and was quite useful.

We also liked the trendy design of this model. It didn’t look like a cheap plastic tool the way other kitchen gadgets look. No, it looked like a serious piece of equipment that was ready to do some serious work. And for the most part, that was the case. This device was ready to do some serious work. It had a pulling bar system that was easy to use and got the device spinning, and it had a braking button that immediately stopped it from spinning when it was pressed. Because this device was also built with stability in mind, it wobbled very little when it was used.

Another salad spinner that impressed us was this one from Gourmia. It too was a large salad dryer and it had a spacious 5-liter capacity. We found that its large size was perfect not only for washing and drying lettuce but also for preparing cabbage, fruits, spinach, and other vegetables for eating. It’s a model that has a crank-style rotary handle that was easy to use and allowed us to comfortably turn the spinner basket. If there’s one thing that didn’t impress us about this product, it was the fact that it did tend to move around quite a bit while it was spinning. We sort of remedied that situation by placing it on a kitchen towel while we used it, but we still wished that the manufacturer had equipped it with some sort of rubber feet that kept it in position better.

One thing that we certainly appreciated was the fact that it could be used with either our right hands or left hands. So many kitchen appliances are designed only with the needs of right-handed people in mind, that it can a real joy for left-handed people when they find a tool that they can use equally well. We were also quite happy that this product was designed to be healthier than other plastic gadgets. This model is designed with BPA-free plastic that’s extremely durable and is designed according to food-grade standards. Knowing that you aren’t going to consume BPA or other harmful chemicals while using this product is sure to instill a sense of peace into the mind of just about anyone.

The real test of a salad spinner, however, is how quickly and efficiently it can deal with the tasks it was designed to do. And we must say that this product did a decent job of draining and drying vegetables. It was easy to set up, easy to use and once we were done with it, it was easy to take apart and clean. For these reasons alone, this device has earned its place on our list.

Cuisinart is a brand well known for its line of food processors, but before we found this kitchen appliance, we didn’t have the slightest idea that they also made salad spinners. And evidently, they not only make these devices, but they also sell them for much less than many comparable brands. That’s why when we saw it, we knew that we had to go out and buy it. After all, when you find a well-established brand selling budget kitchen appliances, it makes you wonder and you just have to test it out for yourself. This is precisely what we did and we were quite pleased with the result.

Although this model was a little bit smaller than the other models we’ve used, with it only having a 3-quart capacity, we found that it worked extremely well. It was easy to add water to this device or drain it without having to take the lid off of it. We also discovered that its spinning mechanism worked well and was quite efficient. And probably best of all, this model didn’t walk around the counter when we used it. All of which made this salad spinner perfect for drying lettuce, fruit, berries, or even herbs. And when we were ready to serve our prepared food or veggies, it’s clear plastic base made an excellent serving bowl. This model might not have the most features or be the biggest lettuce dryer around, but it’s certainly the best budget salad spinner around. It was truly a pleasure testing it out and using it.

An Extensive Guide To Salad Spinners

When the consumer buys the best salad spinner available, it can be a joy to wash and dry their veggies. However, if the consumer doesn’t buy the best one available, and/or uses it improperly, then this kitchen tool isn’t going to do the job they expect it to do. That’s why we’ve decided to go ahead and write the definitive guide on salad spinners. In this guide, our readers are going to find all of the information they need for selecting and using these remarkable devices. 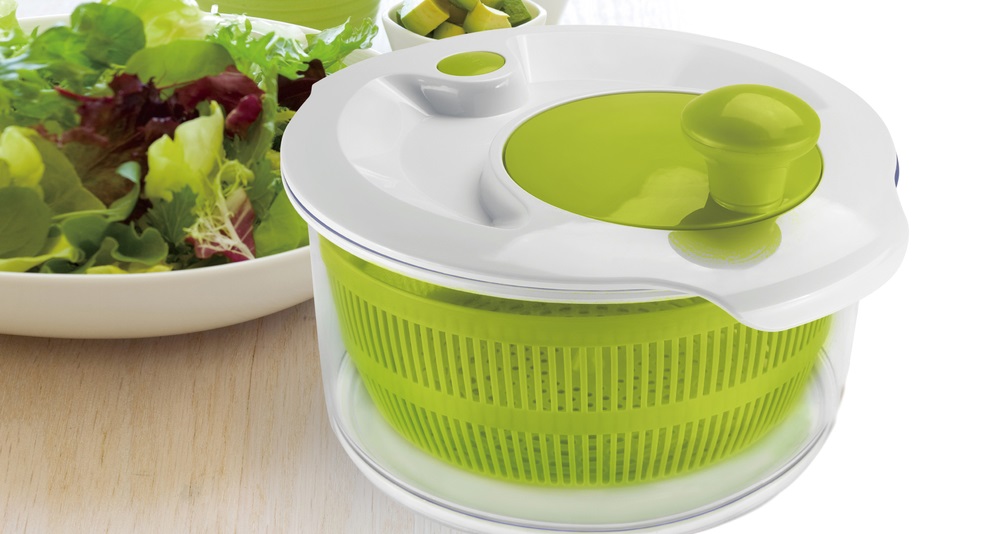 The first thing that any consumer should consider when they’re buying a lettuce dryer is the size of the model in question. Most of these devices come in 3-quart sizes, but there is an increasing number of models that have a capacity of 4-5 quarts. Generally speaking, 3-quart models are suitable for consumers who need to wash and dry enough veggies for 1-2 people, but if they’re going to need to prepare veggies for more than that, then they’re better off purchasing a 5-quart model.

It’s also a good idea to think about the lid. The lid should fit snugly on the model and should lock down securely so that it doesn’t pop off while the salad is being spun. Some of the better salad spinners are also equipped with a drain in the lid that allows the consumer to drain the water out of it without having to open it up.

Another feature that we found to come in handy is a spinner brake. This is a brake that’s activated when the user pushes a button located somewhere on the device. This will immediately stop the spinning action of the spinner, so the contents can be removed from it. Some salad spinners don’t come with this feature, so the consumer ends up waiting for the cylinder to stop on its own.

Most people are also going to want to make sure that their salad spinner fits into their budget. And that shouldn’t be all that difficult of a proposition because these devices are available in all different kinds of different price ranges. There are inexpensive models under $15 and other home models above $40. The consumer is going to want to measure the construction quality of the device and its features against what they’re willing to pay to determine how much they should spend on a new spinner.

The last thing that consumers should consider when purchasing a new salad spinner is what kind of plastic the device is made from. For the health of everyone involved, it’s always best to choose a model that’s BPA-free. For people who aren’t familiar with BPA—its a chemical known as bisphenol A that’s an industrial chemical and is thought to cause cancer in humans. Although we’re not sure if there are any definitive studies on the subject, it’s better to be safe and just choose a model that specifically states that it doesn’t contain BPA.

This next section in our little salad spinner guide is designed to give the consumer some information that will help them use their device properly. Unfortunately, too many people fail to use these devices in the way that they were designed to be used, so they end up with lettuce that’s still soggy. To help our readers avoid that type of disappointment, we’ve included these clear cut directions on using thee devices.