A staple ingredient for many Asian cuisines but also a great marinade for meats and vegetables, soy sauce should be found in everyone’s kitchen. Whether you are looking to try new recipes or just want to find a new favorite brand, it can be hard to tell them apart. There are certain boxes the best soy sauce needs to tick and we have found the products made to the highest standards.

In terms of taste and value, these can’t be beaten so the next time you’re making a stir fry or looking for something to dip your sushi into, make sure it is one of these reputable brands.

One of the most reputable soy sauce brands brings this large 64 oz container of gluten-free soy so you can make your need favorite recipe time and again. Because they use more soybeans in their recipe than other brands, it has an unmistakable taste that is richer than most.

The company itself has been around for over 200 years so you almost expect them to have nailed their recipe so with no artificial preservatives, you get one of the cleanest available and it is also non-GMO verified. Vegan-friendly and great as a marinade or just added to your stir-fry there are plenty of ways to enjoy this large bottle of a premium soy sauce.

Sold in an eye-catching sleeve this is an artisan product that can be appreciated by anyone. Made in Japan in 100-year old barrels it has a full flavor that is on the mild side for a smoother taste. As with the other premium products, there are no preservatives used or additives but with added sun-dried sea salt and what it isn’t for those who don’t like their soy sauce too salty.

You can use it in any meal that suits a dash of soy but to enjoy the full taste, Kishibori Shoyu recommends the consumer eats it raw so dip your spring rolls. We’ve read that some people say using it as a marinade is a waste as you don’t get to experience the flavor in its best form.

This handsome bottle is even better on the inside and is brewed with traditional methods to provide a rich flavor to improve a variety of dishes. The 16.9 fl oz bottle is good value but anyone who is gluten intolerant won’t get along with it as there is wheat flour in the ingredients.

It is made in China which is something you like to hear when it comes to soy sauce and because it is the dark variety with caramel it makes an excellent glaze or marinade. Non-GMO and free-from preservatives it is always good that you can grab a quality bottle as it comes with a balanced flavor that is hard to find.

This popular sweet soy sauce is from Indonesia and could be described as sweet thick soy sauce. Because of the thickness, it makes a great marinade for meats and the only complaint you hear is that it goes fast which isn’t such a bad sign.

Sweetened with cane sugar it is a good value way of getting a thick soy sauce although it doesn’t have as much of a presence on the pallet as some brands. The main grip we have is the preservative sodium benzoate but with so many repeat customers, it seems a lot of people get on with the Unami flavor and its syrupy consistency.

Even a quick glance will tell you this lite soy sauce has a lot going for it as it is kosher friendly and made with no-MSG. The squeezable bottle is great for adding a quick squirt to a meal or a dipping bowl and the low sodium (70% less than regular soy sauce) recipe will be music to a lot of people’s ears.

You get two bottles in this pack which makes it great value, especially since this is an award-winning product. Like a lot of soy sauces, it contains the preservative sodium benzoate but it is so versatile it can be used with Pad Thai, Tom Yum, grilled fish, meat, sushi, and beyond.

A lot of people like to see their products made in the USA, even their soy sauce so this will please them and anyone who likes micro-brewed produce. Using non-GMO soybeans it is the only of its kind brewed in the USA and is an all-natural formula made without preservatives.

You get a batch and bottle number written on the front of the bottle for that authentic micro-brewed touch and the bourbon barrels it is brewed in really gives it a sweet and smoky flavor. Expect a salty flavor, even for soy sauce but some people do find it a little too much. The taste is great but you might want a little more for your money as it’s only 100 ml.

If you are in the catering business or a chef who wants to find a quality soy sauce that lasts then this is a great option. It comes with the reputable brand name of Pearl River Bridge and in the 60 oz container, you’re going to be able to add it to a lot of meals.

This soy sauce has a full flavor and a thick complexion which makes it ideal for use as a dipping sauce. It is combined with mushroom extract to give this dark soy sauce even more flavor.

Although it seems like a simple ingredient, there is more to soy sauce than meets the eye. Some of the low-quality products are full of additives and junk you don’t want to put into your body but on top of that, a lot of people don’t even know they come in both light and dark form.

To help shed some light on this essential ingredient, we have created the following buyer’s guide. It details everything you need to know about this versatile sauce of ancient origins so you can understand it better, and know what to expect from the best products. 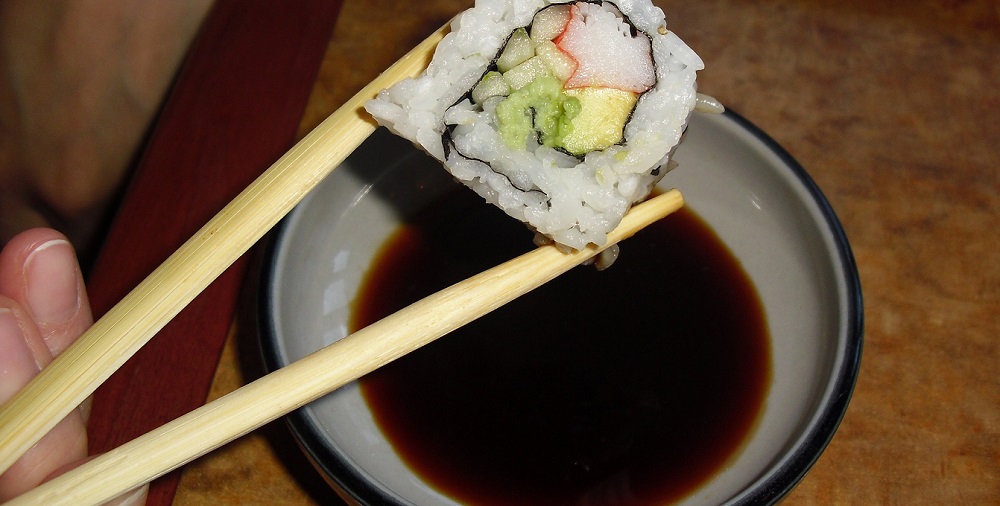 What To Look For In Soy Sauce

This isn’t important for everyone but if you have an intolerance to gluten, you’ll be pleased to know that various soy sauces do not contain wheat. Always check the label and do your research before buying any product and perhaps stick to one that has all the ingredients in English.

This flavor enhancer can be found in a lot of foods and although some of the health risks such as headaches, weakness, and heart palpatations that have been linked to it have been hotly debated, some people deem them as safe. Either way it can be cause for concern and there are plenty of soy sauces that don’t add it into their recipe.

The problem with some products we have researched is that the glass bottles have to travel a long way. This can result in broken packaging although this is still uncommon it is less of a risk with plastic containers. Not only are these easy to squeeze and pour a little extra soy sauce into your meal but they often carry larger quantities.

Although you might have one meal planned and need to use soy sauce as part of the recipe it can be better to consider your future uses. Some products are only good for marinating and dipping whereas others can be added to a Pad Thai or stir fry but will also suffice as a dipping sauce.

This is the most common soy sauce so if you are cooking a Chinese meal and the recipe tells you to pour a little soy sauce in, the chances are it is the light version. As you might expect from the name it is thin when pouring, salty, and commonly used as a dipping sauce.

When it comes to taste, dark soy sauce tends to be less salty and is more likely to contain added sugar. Sometimes this comes in the form of caramel or molasses, making it sweeter and thicker than light soy. Aged for longer, it is often used as a marinade and has been found to contain many more antioxidants than red wine.

Don’t confuse this with dark soy which can sometimes be described as thick soy, this contains more sugar and is often added to stir-fry and is even thicker than dark soy. You don’t need to use as much to add a lot of flavors.

Traditionally this is a Japanese soy sauce that is only made from soybeans. Although you don’t get the same soy sauce aroma as other types it is well balanced and a lot of people consider it to have a richer flavor than Chinese soy sauce. One of the better products for dipping.

Because of the sodium content, it does take a lot for it to spoil but it can. This is hastened when it is not stored in a cool dark place or if the bottle is left open for a prolonged period.

This might not cause it to spoil but it can impact the flavor which is something you want to maintain for as long as possible. When opened, they should be fine for a couple of years but this can vary from product to product.

What Are The Health Benefits of Soy Sauce?

A lot of people believe that the diets of certain cultures are the key to a longer life. The jury is out on the influence of soy sauce but many health benefits are being studied and some of them are looking into the array of antioxidants as well as enhanced gut health.

Does Soy Sauce Contain A Lot Of Salt?

Because of the sodium content, a lot of people are reluctant to try certain brands. If this is high on your list of concerns then you might want to try a light soy sauce or one that is known for having less sodium.

The truth is, one tablespoon of soy sauce contains over a third (38%) of your RDA of sodium. However, you also have to consider the fact that there is a lot less sodium in soy sauce than the equivalent helping of salt.

If you suffer from any heart-related health issue or high blood pressure, it is best to consult your doctor before including it in your diet.

What Is The Best Soy Sauce?

The best soy sauce is often the one that is well matched to the type of meal you are making. Anyone looking to add it to Chinese food will enjoy a light soy sauce whilst using thick soy sauce as a marinade might be better.

However, it is hard to argue against the quality of one brand in particular and that is San-J Tamari Gluten Free Soy Sauce. Because of its rich flavor, it is well suited to all cooking methods particularly sauces and marinades. Made without wheat, and only 100% soybeans it is free-from MSG and comes in a large container so it will last a long time, enhancing the flavor of many meals.