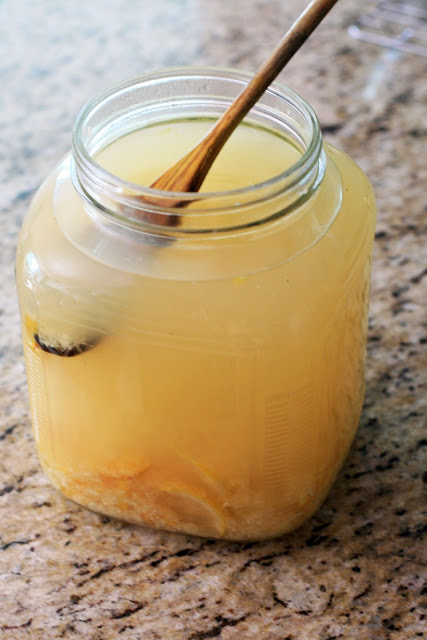 Any other hardcore ginger fans out there?  For me things started innocently enough… an occasional ginger ale on flights.

Then I caught an East Meets West  episode in which Ming’s staple ingredient was ginger syrup.  That was the beginning of the end.  Pretty soon I was having ginger drinks just about every day and seeking out different ginger beers.

My favorite: the Ginger People.  The picture of the ginger riding a tiger on the bottle is just an added bonus.  I also recommend seeking out Blenheim Ginger Ale (available on Amazon).  It’s hot and spicy and can make the back of your throat and nose tingle with the first sip.

From my research it seems like Africa is full of ginger fans as well: most cookbooks had at least one, if not more,  ginger beer variations.  I went with the boozy option…

Peel fresh ginger and roughly chop.  Place into a food processor and process until well broken down into a pulp.

Place the ginger pulp into a large heatproof jar or large bowl.  Add the cream of tartar, lemon juice and lemon peels and stir.

Pour boiling water over the mixture and stir again.  Let cool to lukewarm.

Strain through several layers of cheesecloth or a fine mesh sieve into another large bowl.   Add sugar and stir until dissolved.  Pour into bottles or pitchers and refrigerate until ready to serve.

Do You Fear Cluttering Your Kitchen? Learn When to Replace What!