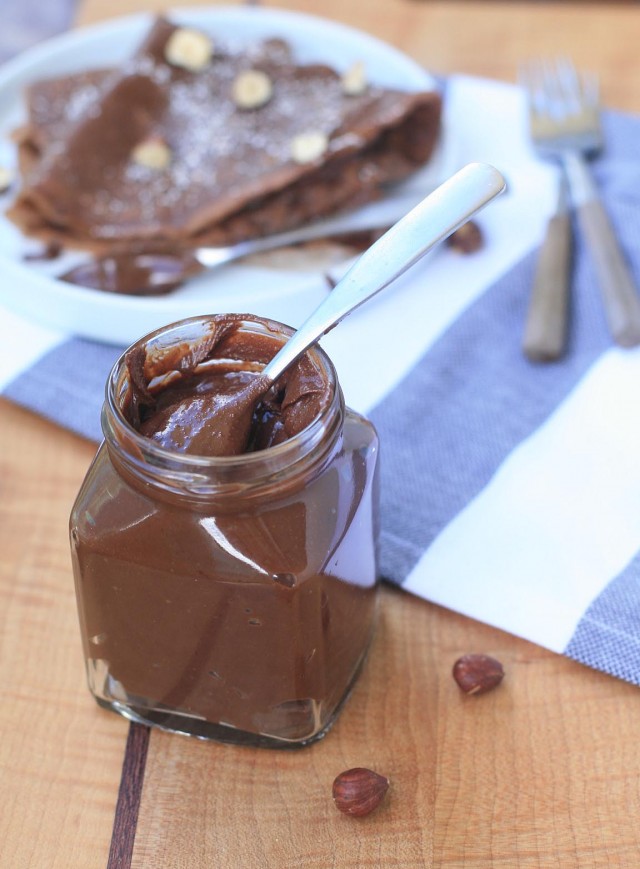 Ahhh… the first time I’d tasted Nutella.  I remember it very clearly (the taste anyways… the rest is sort of hazy, as you’ll see).  I was young, around ten years old perhaps?  We’d just picked up my oldest sister, who’d just returned from a trip to Europe (Austria? Germany?), from the airport.

From deep within the depths that giant duffel of hers she produced a couple jars of Nutella.  When I finally had a taste I had no idea there was any hazelnuts in the spread because 1) I was so focused on the chocolate and 2) I’m not even sure I knew what a hazelnut was.  But I distinctly remember thinking that those European kids had it made if they were eating chocolate sandwiches instead of boring old peanut butter and jelly.

These were the days before Nutella was on every aisle of every major grocery store, back when Nutella was still very much a novelty and treat. 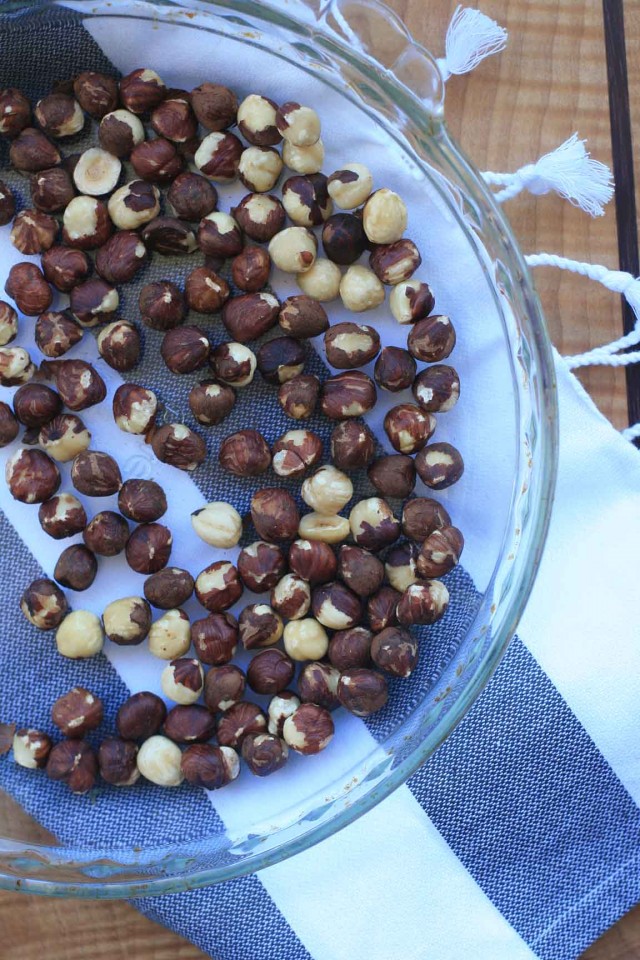 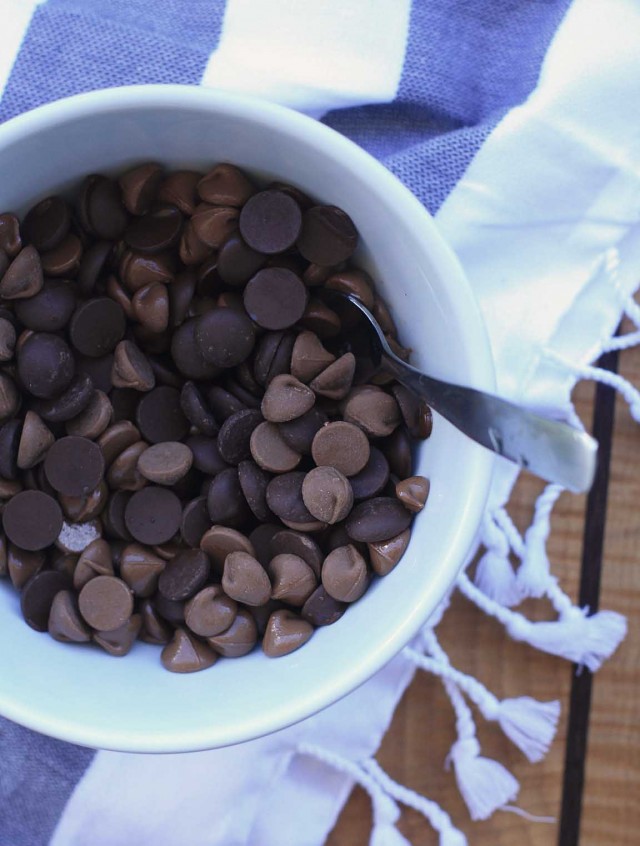 Twenty years (and many, many Nutella crepes) later, the magic has, if not disappeared, certainly diminished.  I recently bought a three pack from Sam’s Club and had a hard time getting through it.  If Nutella and I were in a relationship I would have told him, “it’s not you, it’s me.  I’ve changed.  I want more.”

Like a more pronounced hazelnut taste, not one that’s hidden under all that mild, unmemorable chocolate and sugar.  And speaking of chocolate, I want it dark, rich and pronounced.

Had I realized how easy it was to make, I would have called it quits with Nutella a long time ago. 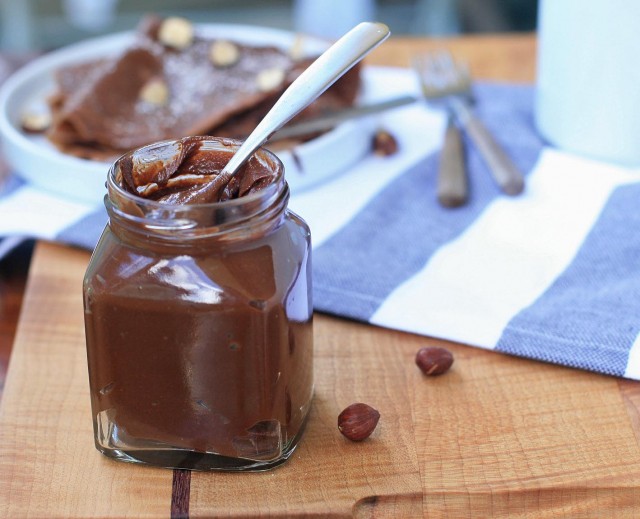 Freshly toasted hazelnuts are ground with cocoa, a touch of powdered sugar and combined with bittersweet chocolate to create a rich and creamy spread that you’re going to want to slather on everything.  Including a bare spoon to be immediately inserted into your mouth.  You don’t need to go all out on the chocolate, but I’d definitely recommend upgrading from Nestle or Hershey’s chocolate… Ghiradelli got the job done admirably.

A word of warning: don’t ever make this if you have any intention of purchasing the store-bought version ever again.  This will ruin it for you, I promise.

p.s.  Yes, I know that Nutella was originally made by an Italian company, but it’s such a part of French food culture that I decided to include it in my French posts. 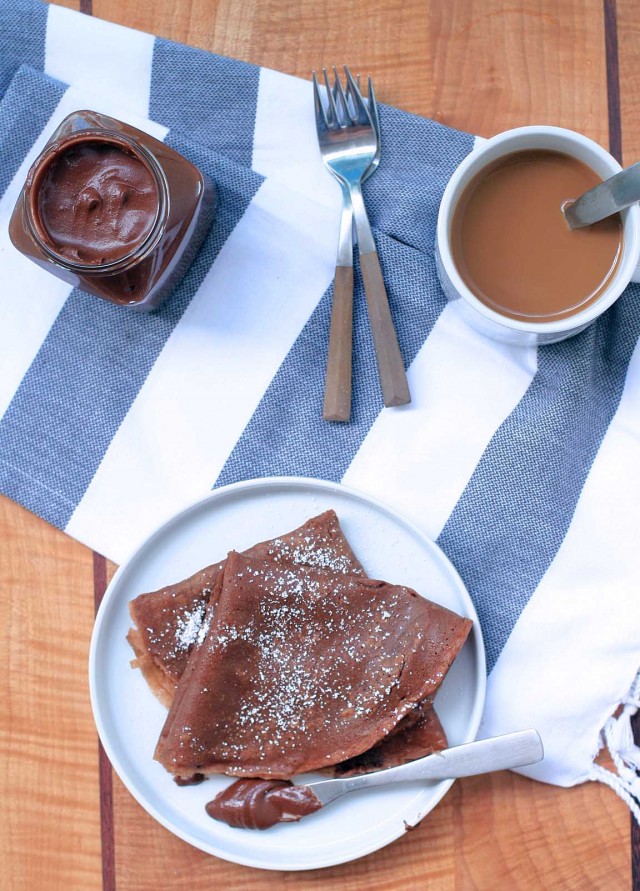 Preheat oven to 350 degrees and spread the hazelnuts in a single layer on a rimmed baking sheet. Toast in the oven until the nuts have darkened and the skins have blistered, about 12-14 minutes. Remove from oven and let cool slightly. Wrap the nuts in a kitchen towel and rub to remove as much of the skin as possible (or you can also just use your fingers to take the skin off the hazelnuts individually). Don’t worry about any of the stubborn skin that clings to the hazelnut. Let cool completely.

Melt the chocolate in a double boiler or in the microwave. Stir until smooth and let cool slightly.

In a high-speed blender (like a Vitamix or Blendtec) or a food processor, grind the hazelnuts until they form a paste. Add the oil, sugar, cocoa powder, vanilla, and salt. Continue to process the mixture (if you’re using a blender you’re probably going to need the tamper) until the mixture is as smooth as possible. Add the melted chocolate and continue to blend until smooth and well combined.

If you’ve used a food processor and would like the spread very smooth, you may need to strain the mixture through a fine-mesh sieve to remove any chunks of hazelnut that remain. The resulting homemade Nutella may be thin and somewhat runny, but it will thicken as it cools. If the mixture is already pretty thick feel free to add a bit of extra oil to keep the mixture more spreadable.