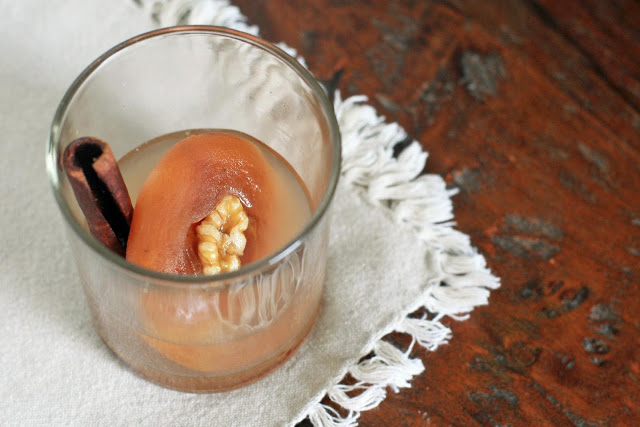 I’m pretty sure that this punch is popular year round in Korea, but the first thing I thought of when I took a sip was the winter holiday season and mulled wine drinks.  But this drink differs from its European counterparts because there’s not as much alcohol, although you can always add more, and it’s typically served cold

I always thought I had a major sweet tooth but I’ve been finding lately that there are plenty of people out there who like things much much sweeter than I do.  I already cut the sugar in half from the original recipe but found that even that was a bit sweet for my taste.  So start of with a little less sugar- it’s easy enough to add more if you feel it needs it.

This was a big hit around here.  Again, most people serve persimmon punch when it’s cold but it’s also great when still warm… I kept sneaking a spoonful or two while it was cooling.  The yang and warmth of the cinnamon and ginger would be great on a cold fall or winter night.

Pour the ginger-infused water into the cinnamon-infused water and add 1/2 cup sugar, honey, rice wine and stir until the sugar has dissolved. Taste and add sugar, if desired. Bring to a boil then removed from heat and cool to room temperature. Cover and place in the refrigerator.

About one hour prior to serving, de-stem the dried persimmon and cut out a small piece near the stem area and place a walnut in the center. Place the persimmons in the punch to soften. Serve with a cinnamon stick and softened persimmon, if desired.

Note: Dried persimmons can be found at Asian or Korean markets.

5 Things You Should Know Before Ordering Seafood In Restaurants