To many people, soy sauce is a condiment that’s only used when someone is eating Chinese take out. It’s just something to add a little bit of flavor to your pork fried rice, General Tso’s chicken, beef with broccoli, or Peking duck. Few people give it any more thought than that. However, we’re here to tell all of our readers that soy sauce can do a whole lot more than that. We’re here to say that soy sauce provides the umami that a whole lot of dishes can benefit from. If you don’t believe us, then follow along on our culinary journey.

The History Of Soy Sauce

Before we start talking about some of the things that we can use soy sauce for, we thought it would be nice to talk about the storied history of this product. It’s believed that it can be traced back to a sauce known as Jan in ancient China. Various forms of Jan were developed using different combinations of fruit, seaweed, and vegetables. That was over 2,200 years ago.

The Jan that was designed for grains was made from wheat, rice, and soybeans and this was believed to be the archetype for modern soy sauce. This sauce would migrate to Japan sometime during the 7th century when Buddhism was introduced to the country.

As far as production in the U.S., that didn’t start until 1908. This is when the Hawaiian Yamajo Soy Company started in the Territory of Hawaii. In 1933, La Choy began producing and selling a hydrolyzed vegetable protein-based soy sauce.

Now that we’ve covered a brief history of soy sauce, it’s time to turn our attention to some of the ways that soy sauce can be used to create fantastic dishes. The following ways of using your best soy sauce run the gambit from the expected to the unexpected. Let’s take a look at some of them, shall we? 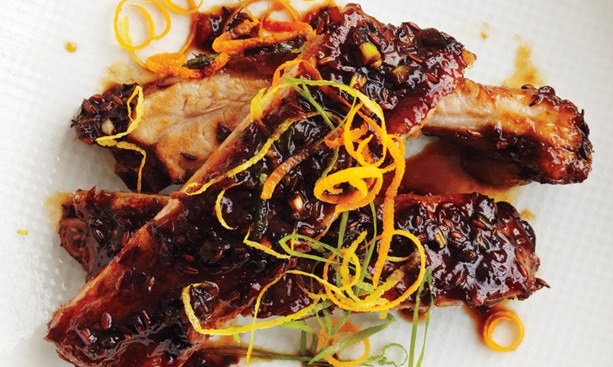 This is one of my favorite dishes to make with soy sauce. These are baby back ribs that have a nice citrus overtone to them and a beautiful umami undertone to them. Below are some of the ingredients you’ll need as well as how to make this delightful dish.

Place ribs, a half cup of soy sauce, three minced garlic cloves, two teaspoons of cumin seeds, and one teaspoon of red pepper flakes in your crockpot. Place the crockpot on low and cook for approximately 8-hours.

When the ribs are in the last half hour of cooking, heat the oil in a small saucepan over medium heat. Place about three teaspoons of cumin and two teaspoons of red pepper flakes in the oil and lightly toast until they’re fragrant—or about thirty to forty-five seconds. Now add the six minced garlic cloves and the scallions. Saute for about two minutes or until everything is soft. When that’s done, place the remaining half cup soy sauce in the pot, along with the honey and orange juice. Bring the sauce to a boil and then cook for approximately 15-minutes or until it has thickened.

Carefully remove the baby back ribs from the crockpot and place them in a pan that’s lined with aluminum foil. At this point, the ribs might slip out of the meat, and if that happens it’s not a big deal. When the ribs are all in the pan, brush with the sauce that you’ve just prepared. Preheat the broiler and then place the ribs underneath it. Allow the ribs to broil for approximately two to three minutes and then take them out of the oven. To finish the dish, sprinkle some scallions and citrus zest on them. 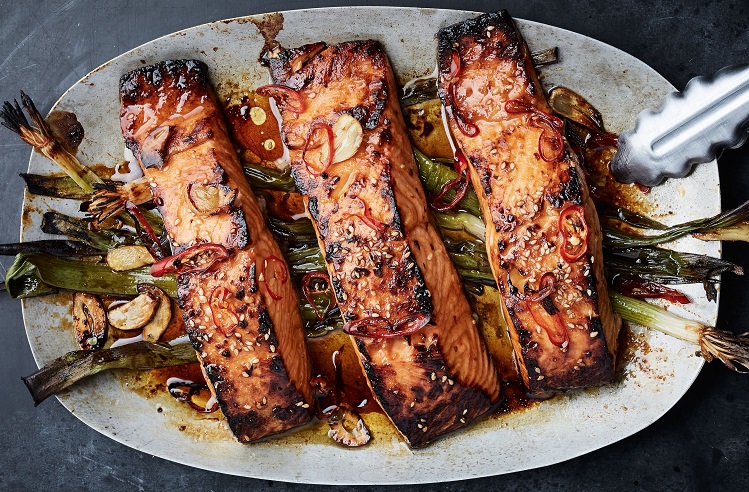 Salmon is a great way to get Omega 3 fatty acids in your diet, and this dish is a delicious way to work some salmon into your diet. It’s also pretty easy to make, and doesn’t require but a small handful of ingredients including soy sauce.

Whisk together one tablespoon of oil, garlic, lime juice, soy sauce, honey, and a half teaspoon of sesame seeds in a small bowl. Liberally salt the salmon with Kosher salt and black pepper and then place them in a resealable plastic bag. Add half of the marinade. Press out the air and seal the bag. Allow the salmon to sit for anywhere from 30 to 45-minutes. Set the other half of the marinade aside.

Preheat your boiler. Toss the scallion with two teaspoons of canola oil in a pan and broil until lightly charred, for about 2-minutes or so. Remove the salmon from the marinade and place it on top of the scallions. Spoon the reserved marinade over the salmon and then broil about 5 minutes or until the salmon is charred around the edges. Spoon the marinade over the top, top with the chili, and then broil until the salmon is at the desired doneness. When done, sprinkle with sesame seeds and serve.

Other Soy-Sauce Based Dishes