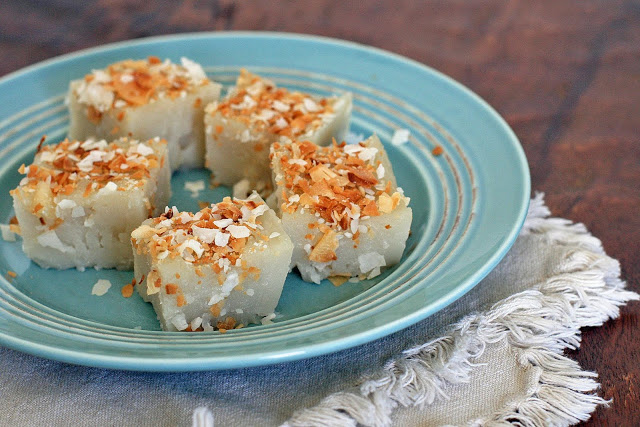 With all the Asian and Pacific coconut desserts out there (mochi, bibingka, haupia, etc., etc.), it’s always surprising when a recipe using a similar list of ingredients to many other desserts results in something that seems entirely different and unique.  Such was the case for these coconut squares; they were thick, coconutty and creamy with a unique jellied texture.  For those of you who are familiar with Asian/Pacific desserts, they had a similar mouthfeel to Chinese Steamed Rice Cakes (Pak Tong Koh?) but with a coconut flavor similar to Hawaiian Haupia.

The original recipe called for the cashews to be mixed into the coconut squares but I found that they were distracting to the otherwise creamy and smooth texture.  I would have preferred them sprinkled on top with the coconut, and so I changed the recipe below to reflect that.

Butter or grease a 9-inch square baking pan and set aside.

Combine the coconut milk, maple syrup, jaggery and salt in a medium bowl and stir to combine. Put the rice flour in a heavy-bottomed medium saucepan and gradually whisk in the coconut milk mixture. Bring to a boil over medium heat, stirring continuously. Cook until the mixture pulls away from the sides of the pan.

Pour into the prepared pan and flatten. Sprinkle with the chopped cashews and toasted coconut, if desired. Let cool to room temperature, cover with wax paper and refrigerate until cool. When cold, cut into desired size.