When we started this article, we wondered just how much thought people gave to tortilla chips, and in our opinion, there are probably few people who think seriously about these chips before they snag a bag. Most people just usually grab the first bag they see and not give it a second thought. We thought that was pretty funny, considering how these chips are not only some of the most popular snack food in the U.S, but also end up in a variety of different dishes enjoyed by millions of people each week. That’s why we decided to give these chips the respect they deserve and talk about the best tortilla chips made nowadays.

Best Overall: Real Food From The Ground Up Cauliflower Chips

When we consider the best tortilla chips, we consider several different things. We not only think about how the product tastes and the level or crunch it provides, but we also think about how healthy the product is when everything is said and done. And by considering all those things, we have concluded that these chips are the best. Not only are they made with healthy ingredients such as cauliflower, tomatoes, garlic, and other natural ingredients, but they’re also made with cassava flour–a natural ingredient that makes them crunchy. All of this makes these grain-free tortilla chips one of the best snacks one can eat.

Anyone who isn’t familiar with Doritos nacho cheese flavored tortilla chips probably has lived in a cave somewhere because this is one of the most iconic snack foods available. Doritos even did a line of commercials showing their bags without their names on it just to show that everyone knows about these chips. However, its familiarity isn’t the reason why we decided to put this up so high on our list. The reason it’s on this list is that these chips are crunchy and have a cheese flavor that we love. And because this product comes in 1-ounce bags, they’re the perfect size for snacks or for putting in children’s lunches as a snack.

It’s not often that a person sees multigrain tortilla chips like this product, so when we got the chance to review it, we were thrilled. We were looking forward to a product made with more natural ingredients, and one that boasted a big crunch, and we weren’t disappointed. This product is made with sesame, flax, sunflower, and quinoa seeds, so it had both big flavor and big crunch. Although it was a little higher in fat than we thought it would be, it was still a cholesterol-free product that was free of artificial flavors and preservatives. It was also low in sodium and delivered 18-grams of whole grains per serving.

Never in a million years did we think that we would be including a Weight Watchers product in our top ten list of the best tortilla chips, but here we are. We’re including this product on our list not only because it’s a low-calorie option for people watching their weight, but also because these are some fine tasty chips. Sure, they might costs a little bit more than other tortilla chips, but we think in the end that they might be worth it. They’re crunchy, salty, and leave a person satisfied after just one little 80-calorie pouch. And all of those are good reasons to give these chips a try.

Lime-flavor is a natural choice for flavoring tortilla chips, and this brand probably does it better than just about anyone else. These chips have a bold lime flavor that snackers are going to want to come back to again and again. Although these chips are a little bit expensive, they do deliver a great flavor, and also a great big crunch that makes snack time a big-time event. And on top of that, these chips not only taste great, but they’re also soy-free, grain-free, dairy-free, and even vegan-friendly. They’re free of preservatives as well and are made with wholesome ingredients such as ground chia, cassava flour, and lime oil instead.

Another flavor that seems to go well with tortilla chips is ranch flavoring. We’ll go even further and say that it’s pretty much a classic nowadays. And fortunately, this brand does this flavor quite well, although there is a slight aftertaste to these chips when they’re used without dip or guacamole. However, that’s because this is an all-natural and gluten-free product. It’s a product that’s also high-protein, all while being lower in fat and sodium than other brands of chips. Each bag is also packed with 19-grams of protein–which is 38% of the RDA of daily protein recommended.

Consumers who are sick and tired of the same boring snack foods might want to give these chips a try. However, if they do, they should be very careful, because these chips might just be too hot for some people to handle. These tortilla chips are made in Austin, Texas and are made with super-hot ghost peppers that are combined with jalapenos and fresh cilantro. This not only creates one of the hottest chips we’ve ever tasted but also a very unique flavor. These chips might not be for everyone, but for those who love super hot snacks, these chips are an absolute must to buy.

Not all tortilla chips are made for dipping. Many of them break when they’re loaded down with sour cream, French onion dip, or guacamole. Fortunately, these chips are made in a way that allows them to hold up to the stresses of heavy-duty party dipping. It doesn’t matter if the consumer wants to dip salsa, chili, or queso, these chips are up to the task at hand. They’re sturdy, crunchy, and even have a little bowl shape to them that allows them to hold onto all of the dipping goodness. They’re also gluten-free and come in a party-size bag worth sharing with friends and family.

Okay, so these chips are only packed into 7.5-ounce bags, which is a bit smaller than what we’re used to, but we have to say that the chips in these bags taste very good. These chips are made with organic corn, sesame seeds, and other ingredients that give them big flavor and a bigger crunch. They’re also a healthier chip than many of the other tortilla chips available. They are gluten-free, Kosher, and contain certified organic corn. They’re a non-GMO chip that’s free of artificial flavors and colors, artificial preservatives, and hydrogenated oils as well.

We’re going to start this review by stating what we don’t like about this product. Our biggest complaint about it is that these snack-size bags are only 0.875-ounces, which is smaller than ordinary snack-size chip bags. It’s not a huge deal, but it’s certainly something for consumers to keep in mind to avoid feeling cheated. Having said that, what we do like about this product is that it’s made with wholesome organic ingredients and is free of artificial colors, flavors, and preservatives. It also has a great white cheddar flavor and has a big crunch. All of which makes it a wholesome bold snack anyone can enjoy.

Tortilla chips are making a big comeback nowadays, so consumers might want to make sure that they stock up on a bag or two of their favorite flavors. And for people who aren’t very familiar with these types of chips, then they might want to acquaint themselves with it because tortilla chips are more than just a snack. Yes, if you think that these chips are only for eating straight out of the bag or for dipping, then you are missing out on one of the best ways to use these chips, and that’s in main dishes.

One thing that people don’t always realize is that there are some fantastic ways to use tortilla chips in the kitchen. There are almost a limitless number of dishes that can be made with tortilla chips, and all the consumer has to do is use a little bit of their imagination to create great dishes that put this salty and crunchy snack food to good use. To show our readers just how versatile these chips are, we decided to go ahead and list some of the great tortilla chip recipes that we know of and regularly make. 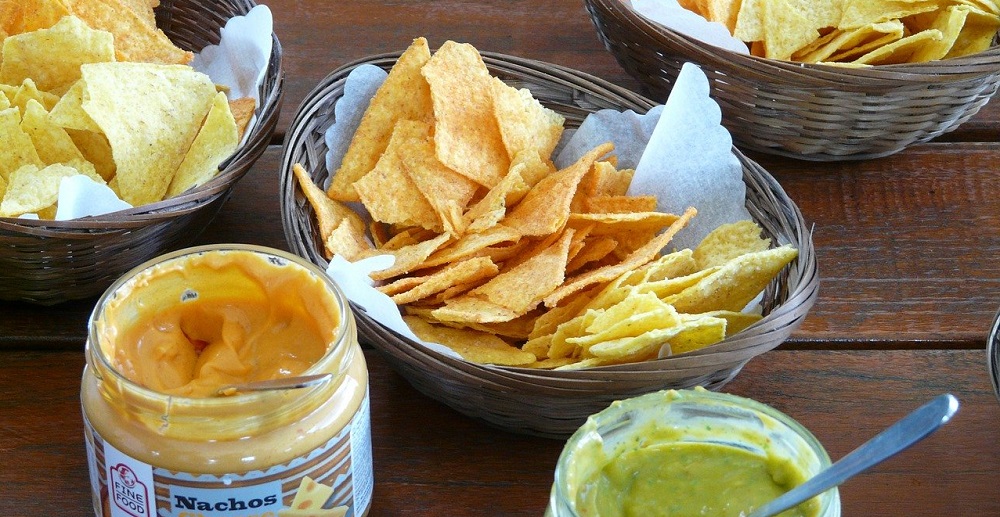 One of the first recipes we want to introduce is Monterey Chicken Casserole. This is an easy-bake casserole that combines tortillas with fresh ingredients such as chicken, bell peppers and cheddar cheese in a great tasting dish that your guests are going to love. Although some versions of this recipe also use creamed corn, we think that the recipe is better without it.

Tacos In A Bowl

Another recipe that we like is a dish called tacos in a bowl. Think about it. What comprises a taco? It’s merely a crunchy fried corn tortilla that’s stuffed with meat, veggies, and cheese. This recipe builds on this basic concept, except instead of using a taco shell, it uses tortilla chips. After all, isn’t a tortilla chip just a broken up taco shell? Let’s find out how to make it.

Other Ideas For Tortilla Chips

Since we’ve covered two exciting tortilla recipes, we thought it might be a good idea to talk about some of the other ways that tortillas can be used. In our opinion, if more people realized that all of the ways that they could use tortilla chips, then they’d be flying off of the shelves. Let’s look at some of the dips, dishes and other methods that tortilla chips can be used for, shall we?

Consider Tortilla Chips For Use With: