Percolators for making coffee get a bad rap nowadays. Some people either consider them to be an old-fashioned way of making coffee or associate them with the large percolators that make stale coffee for reception halls. However, we find both representations of this product to be false. In our opinion, the best coffee percolators do an amazing job of making a cup of Joe—as long as a person buys the right model and uses it in the right way. To help bring percolators back to the forefront and to show our readers that these devices can make some of the best coffee they will ever drink, we decided to write this entire article on the subject.

Consumers who are looking to make a great pot of coffee need to look no further than this coffee percolator from Chinook. This model is capable of making 6-cups of delicious coffee when it’s used properly. It’s a model that’s made of 18/8 polished stainless steel that has seamless parts.

It’s also a model that’s can be easily thrown into a dishwasher or washed in the sink when the consumer needs to clean it. And with a capacity of 48-ounces, this percolator is perfect for one or two-person households, or for households where there isn’t a large amount of coffee being consumed at one time.

Another thing that we liked about this model is that it had a handle that can be grasped for pouring the coffee. This handle is made of Permawood, so it doesn’t heat up with the rest of the percolator. If there was one problem that we had with this unit, it was that it had a plastic lid knob.

Although we didn’t have any problems with that knob, we feel that some people aren’t going to appreciate a plastic part being incorporated into a coffee percolator. After all, some people buy percolators to avoid using a device that has plastic parts that get heated, like coffee pots. Having said that, the knob is well made and we don’t anticipate any problems developing from it.

Electric coffee percolators are very handy appliances to have in the home. All the consumer has to do is fill them up with water and coffee and then plug them in. They immediately begin brewing coffee that tastes a lot better than coffee brewed in plastic coffee makers. And this model is one of the best electric percolators available.

It’s capable of brewing up to 12-cups of delicious coffee and have it done in only a few minutes. It’s made with a stainless steel body that has a beautiful copper finish, and its top knob is made out of glass instead of plastic. And because it has a stay-cool handle and base, it’s safe to use as well.

If there was one complaint that we had about this percolator, it was that its cord was a little bit shorter than we would have liked. We generally like electric percolators to have a longer cord so that it can be placed further away from the outlet when it’s placed on a counter, but that wasn’t an option with this model.

Fortunately, that isn’t a big deal for most people and is eclipsed by all of the great features that can be found on this percolator. Features that include a filter-less design that doesn’t require the consumer to spend hard-earned cash on filters and a stylish construction that’s long-lasting and durable.

In our experience, it can be difficult to find a coffee percolator that not only brews a fine cup of coffee at home but is also capable of brewing an amazing cup of coffee at a campsite. This results in campers always being on the lookout for percolators that they can take out on the trail.

Fortunately, we’ve found such a product. A percolator that’s great for home or outdoor use and makes one of the finest cups of coffee we’ve ever tasted. And it’s a percolator that never requires any filters whatsoever, so campers can always enjoy a cup of coffee anywhere without having to pack paper or fold-up filters.

We also liked how this percolator was constructed. It’s made out of 18/8 stainless steel and is made without any plastic or aluminum. Yes, you’ve read that correctly. This product contains no plastic or aluminum in its construction. It has a glass cover knob, so consumers never have to worry about whether their coffee is in contact with heated plastic or have to worry about another piece of plastic ending up in a landfill.

And finally, we’d like to say that this product also has a dishwasher-safe design, so the consumer can easily clean it out when necessary. That makes this a product that should be considered by not only campers but anyone looking for a great percolator.

Not everyone wants to spend a lot of money on a coffee percolator. Some people simply want an inexpensive model that brews a great pot of coffee. Fortunately, we’ve found such a budget percolator and it’s one that we think works very well, even though it costs considerably less than other models.

The company that manufactures this product is capable of accomplishing this feat because it used aluminum instead of stainless steel for the body of the unit. While this allows the unit to cost less, it also means that the percolator is likely to get dented at some point in time. While we used it we didn’t have that particular problem, but we did feel that it wasn’t as durable as stainless steel percolators.

Fortunately, the things that we liked about this model were more numerous than the things we didn’t like about it. This percolator holds approximately 36-ounces of water, so it makes quite a few cups of coffee. It’s also a model that can be used with both electric or gas stoves. It can also be placed on a stand and used for cooking as well.

Another thing to mention about this percolator is that it has a stay-cool handle that makes the unit easy to pour, and it has a lidded spout that enables the user to easily pour coffee. All in all, this is an inexpensive percolator that’s perfect for people who aren’t sure if they’d like using a percolator and wants to try one out or a person who needs a percolator for home use.

The Coffee Lover’s Guide To Percolators

Now that we’ve introduced our readers to some of the best coffee percolators, we thought that we’d give them a handy guide that will educate them further on this subject. In this guide, we’re going to go over the history of percolators, how they compare to drip coffee makers and how coffee lovers can use their percolator to make the best cup of coffee they’ve ever tasted. 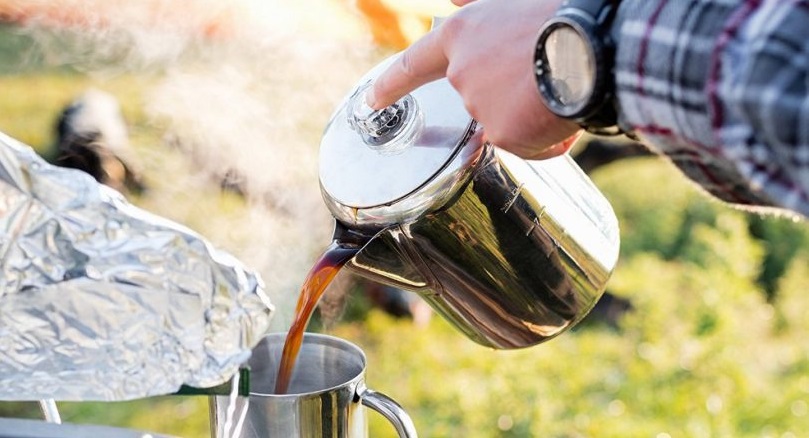 The History Of Coffee Percolators

Coffee percolators have been around for a long time, and we do mean a very long time. The first device capable of making stovetop coffee using a continuous hot water cycle was a device that was used approximately 200+ years ago and was invented by Joseph Henry-Marie Laurens in Paris. The first patent obtained in the United States for a coffee percolator was obtained by James Nason in 1865. However, that percolator was quite different than modern ones because hot water and steam didn’t rise through the model. Instead, it used a down-flow system. The modern percolator was invented by Handson Goodrich in 1889. Hanson Goodrich was a farmer in Illinois when he patented his percolator. And unlike previous models, this percolator had many of the components found on modern percolators. It had a central up-flow tube with a perforated basket on it, and it had a broad base for sitting on a stovetop. During the 1920s, modern electric percolators were made, but there are considerable disagreements over which company or companies may have invented it.

How To Use A Percolator To Brew Coffee

As we wind this article down, we would like to take a few more moments of our reader’s time and talk about how to use a percolator to make a fantastic cup of coffee. Although most people think they know how to use a percolator, the truth of the matter is that making coffee with these devices requires a very specific process to avoid bitter-tasting or weak coffee. Let’s learn some of the steps the consumers should follow to make a great cup of percolated coffee.

Step One: Measure Out The Coffee

The first step is to use the right amount of coffee in the percolator. We recommend that consumers use approximately an ounce of coffee for every 17-18 ounces of water. For example, if you’re brewing a 36-ounces of coffee, then you are going to need approximately 2 to 2.11-ounces of coffee. For the best results, we suggest that the consumer grind their own coffee grounds and only grind them right before they intend on brewing their coffee.

The next step is to add cold water to the percolator. During this step, it’s advisable that the consumer use filtered water for the best results and don’t exceed the maximum fill capacity of their percolator.

Step Three: Assemble The Percolator And Add The Coffee Grounds

If it’s a stovetop model, make sure it’s on the burner and the burner is turned to the low or medium heat setting. The brewing process should be low and slow so that the coffee percolates and doesn’t end up boiling. During this stage, keep an eye on the percolator to make sure it’s not boiling. There should be a constant stream of coffee going through the glass knob. If it’s not constant and is more like an occasional pop, then the heat needs to be turned down. Once the coffee is boiling properly, set a timer for anywhere from 8 to 10-minutes, depending on how strong you like your coffee. After the elapsed time, take the percolator off the heat and enjoy a hot, fresh cup of percolated coffee.