After several weeks of drinking copious amounts of booze and testing (and eating) a bunch of desserts, I’m  doing my best to get South Korea off on a healthy start.  I chose these beansprouts as the opening recipe for several reasons.  First, because just about everybody can enjoy them since they’re gluten-free, vegetarian, vegan, etc. Second, because some of my later recipes will use these as a topping.  Third, and most importantly, because they’re pretty awesome.

I’m not the kind of girl who would normally get excited over something like bean sprouts (usually it’s chocolate, cheese, etc.) but I can definitely see myself adding these to a frequent rotation around here.  They’re crunchy, spicy, fresh  and complex.  Most importantly, they’re easy to prepare and quick to come together.  Next time I’m definitely making a double batch. 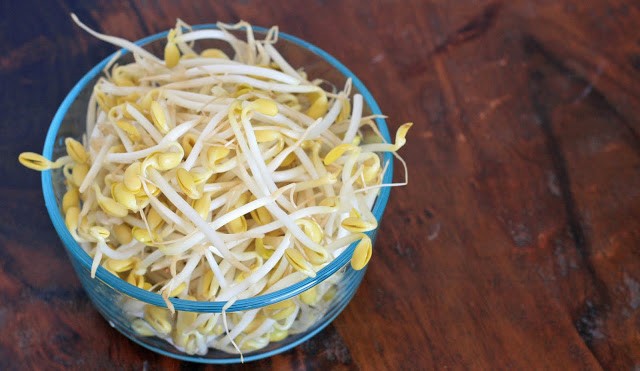 Wash the bean sprouts in cold water. Place them in a saucepan and add two cups of water. Cover and bring to a boil. Boil the sprouts for 7-8 minutes and do not lift the lid during this time. Remove from heat and rinse the sprouts under cold water and drain.

Note #1: For toasted, crushed sesame seeds, toast whole sesame seeds in a skillet over medium heat until the begin to turn golden. Let cool slightly. Place in a coffee grinder or a food processor and pulse several times.

Note #2: Both the Korean chili powder and the red chili pepper threads can be purchased at an Asian or Korean grocery.