Even though not every single kitchen is going to have the room for a slicer, for those households that do, it’s an almost essential piece of equipment to buy. That’s because a slicer can be used for cutting meat, vegetables and just about anything else the cook needs to buy. This expands the number of dishes that can be cooked in the home and allows everyone to make restaurant-quality meals. It’s such an important piece of equipment, we’ve decided to review the best meat slicers available. Models that deliver professional quality cuts, are easy to use and are easy to clean.

We have to say that when we first saw this meat slicer we were blown away. It was a model that was designed for commercial use but could easily be used in the home. This model features a powerful 320-watt motor that provides the blade with all of the power that it needs to cut through meats, cheeses, vegetables, or fruits up to a 0.4-inch thick. It’s a slicer that has a body made of aluminum-alloy, which is less likely to corrode than the metal used to make other slicers, and it has a quality 10-inch blade that’s made of stainless steel and is coated with Teflon. Let’s find out how that blade makes a difference.

Most of the blades used on modern meat slicers use a carbon steel blade. While that blade generally works very well, it does have a few drawbacks. For one, the blade ends up getting oxidized quite easily, especially if the consumer doesn’t make sure it’s washed and immediately dried after use. Another drawback of carbon steel blades is that heat can build up across the blade during heavy slicing sessions, and this excess heat can cause the blade to become blunt. This slicer’s 10-inch stainless steel blade doesn’t have those problems. It not only doesn’t corrode as easily as carbon steel, but the Teflon on it helps to prevent heat buildup, and this helps prevent the dulling of the blade.

Of course, the blade isn’t the only reason for consumers to consider this premium meat slicer. It also boasts a few other features that are quite useful. For instance, it has a built-in sharpener that keeps the blade razor-sharp and only takes a few seconds to use. This model also has non-skid feet to keep the slicer from moving around the counter during use and a waterproof on/off switch for safety. It also features a blade guard and a removable tray assembly that’s easy to keep clean. Sure, this meat slicer might cost more than comparable slicers, but we’re confident that it’s a model that’s sure to provide both commercial and home kitchens with years of service.

We fully understand that not everyone needs a commercial meat slicer. While commercial models are good for handling a large number of meats, vegetables, and cheeses, they often take up quite a bit of counter space. They also usually have a hefty price tag attached to them, a price tag that may turn some people off to buying a slicer. On the other hand, the last thing that people want is a “cheap” slicer that doesn’t do the job they want it to do. That’s why we’re taking it upon ourselves to find a slicer that existed somewhere these two extremes. A model that did a great job slicing, but didn’t require the home cook to take out a loan. And this is the model that we’ve found.

This model is designed from the ground-up to be functional but doesn’t have the high price tag that some slicers do. In fact, in some instances, this slicer is only 1/4th-1/3rd the cost of many commercial slicers. And it was designed in such a way that it still had the features the consumer needs to get the job done. One of the first things worth mentioning about this slicer is that it’s equipped with a 200-watt motor that delivers a fast blade speed. Although this motor might be able to deliver the yield that 300+ watt slicers deliver, most homes aren’t going to need that kind of meat cutting capacity in the first place.

Another thing that we liked about this slicer was that it had a 7.5-inch serrated blade that really cuts through meat, cheese, and vegetables well. And it’s cutting thickness is easy to adjust using its thickness knob. This knob can be set from 0 to 0.59-inch, so the consumer can dial in the thickness that they desire. Other important features that can be found on this model includes rubber feet that help to keep the slicer from sliding around, child-lock protection switches that help prevent children from turning it on, and a removable slid-rod extension for easy cleaning.

To be completely honest with our readers, we weren’t all that sure about this slicer when we first came across it. Why? Well, for one, it’s price tag seemed to be almost too good to be true. It was considerably cheaper than even some of the budget-conscious meat slicers that were available. Another thing that made us suspicious about this slicer was that it had a cheap look to it. It just didn’t look like it was capable of doing any type of serious slicing, and if it did, we were sure that it wouldn’t last very long. Fortunately, we were wrong on both counts, and this slicer turned out to be a pretty good one.

Don’t get us wrong, we’re not saying that this model can compete with the commercial slicers or even the budget-conscious ones. All we’re saying is that it will do most of the slicing that home kitchens are going to need it to do, and it’s going to do that slicing without falling apart. We found that this slice had a decent 180-watt motor that operated the 8.7-inch stainless steel blade with enough speed and force to slice vegetables, meats, and cheeses quite well. It was capable of slicing meat up to 9/16th of an inch, and it had a removable stainless steel carriage cover that was easy to maintain.

Another thing worth mentioning about this slicer was that it had non-slip feet that kept it from sliding around while it was being used. We also liked the fact that this model was compact and didn’t take up a whole lot of counter space, and if the consumer didn’t have the counter space in the first place, they could easily move it and store it elsewhere. With all of that in mind, we think that this is a decent budget slicer that should serve most people well, especially if their expectations aren’t too high. It’s a model that’s suitable for the household that does the occasional meat or cheese slicing and doesn’t want to spend too much on one of these tools.

A Guide to Meat Slicers

Having just spent our time researching some of the best meat slicers available, we learned a lot about these tools. We learned how they operate, what features are useful, and what features are not. We also discovered just what the consumer should look for when they’re choosing a new one. We’ve decided to take all of this useful information and share it with our readers, so they too can find the best home slicer for their meats. And this guide is the fruit of our labor, so we hope all of our readers find it quite useful. 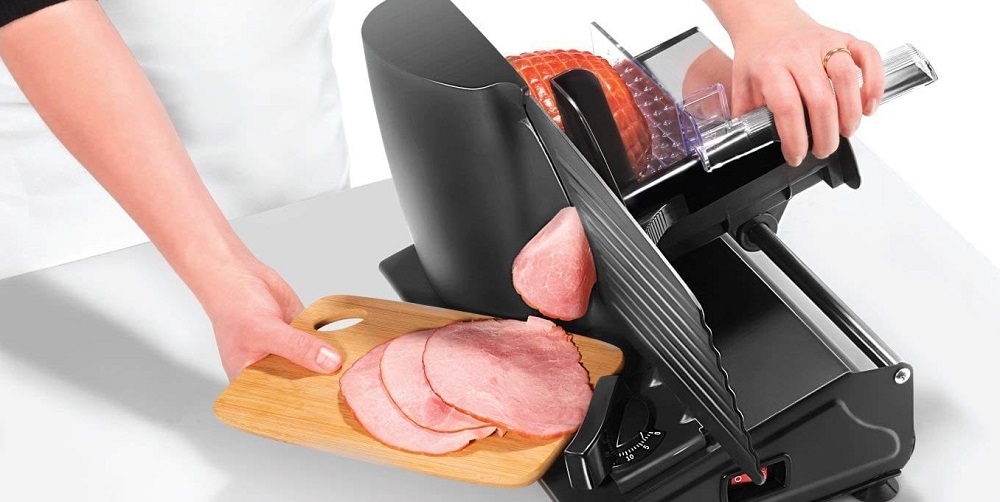 The Benefits Of Buying A Meat Slicer

We understand that not all consumers are convinced that a meat slicer is a useful addition to their home, despite our assertions that indeed it is, so we decided to list some of the benefits that the consumer can gain from buying one. We’re sure that once all of our readers look over the following list, they’ll understand just how valuable these machines are and what to purchase one for their home. Let’s take a look at 3 reasons why everyone should consider adding a meat slicer to their kitchen.

Reason One: They Save Money

The first reason for owning a meat slicer is that they save the consumer money in the long run. Whole meats that haven’t been sliced are cheaper than pre-sliced meats or having the butcher at your local store slice it. This can save the consumer quite a bit of money, and most slicers pay for themselves in no time flat.

Another reason for using a home slicer is that it allows the consumer to choose how thin or thick their cut is. Most of the packaged sliced lunch meat sold these days are one uniform size, which can make it difficult for people who like paper-thin cuts or ham-like thicker cuts.

Reason Three: Allows The Consumer To Process A Variety of Foods

Of course, meat slicers aren’t just good for slicing meat. They can be used for a variety of other food processing jobs. How do restaurants get even tomato slices for their burgers? They use a slicer. It can also be used to slice cheeses for sandwiches, green peppers for pizzas, and even cabbage for sauerkraut.

Now that everyone understands the importance of using these slicers in their kitchen, it’s time to get the central purpose of this guide and find out how to buy the best meat slicer possible. Although meat slicers aren’t that complex, there are a few key features that consumers should keep in mind when they’re buying one. In this guide, we’re going to examine each of those key features.

Step One: Choose An Appropriate Size

The very first thing that the consumer is going to want to consider is the size of the meat slicer. Although large slicers are capable of dealing with huge cuts of meats and thick blocks of cheese, they do take up a bit of counter space. And if there’s not enough counter space for the consumer to use the slicer, then they’re probably not going to want to use it that often. Therefore, the consumer needs to choose the size that fits their needs the best but is small enough to be easily placed in their kitchen. On average, most slicers are available in the 7-inch to 14-inch range, so consumers have plenty of size options to choose from.

The next thing to think about is the size of the slicer’s motor. As a general rule, the large the motor, the more power it will deliver to the blade. Although some consumers aren’t going to need the power provided by a 300+ watt motor, if the consumer intends on doing a lot of slicing they’re probably going to want to get a model in this range. That’s because if the motor is worked harder than what it was intended to do, it will end up overheating, and the user will have to pause slicing operations until the motor has sufficiently cooled down. Of course, if the consumer doesn’t need that kind of power, then choosing one in the 150-watt to 250-watt range should work just fine.

Finally, we would like to talk about some of the other options that consumers might find useful when they’re thinking about buying a new meat slicer. Although not all of the following features are necessary, they do make using the slicer safer and easier to do, so they should at least be considered.