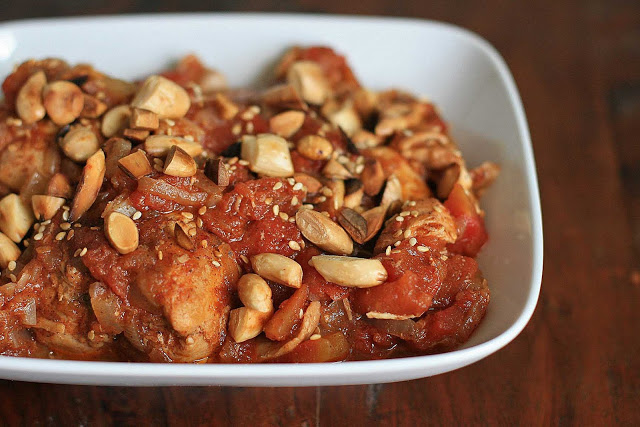 I sure have had a bunch of really good chicken lately.  Just in the past couple weeks alone there’s been the Sri Lankan black chicken curry with roasted spices, the spicy cashew coconut chicken, and now this gem.

In this Moroccan tangine, boneless chicken enjoys a nice, slow simmer until it’s falling apart tender and the tomatoes break down into a thick, rich sauce spiced with ginger, cinnamon, saffron, honey and harissa.  Toasted, blanched almonds and sesame seeds top the dish to give it some crunch. I kept this recipe family friendly, but feel free to double the amount of harissa if you’d like a little extra heat.

If there are any fans of Persian food out there, this dish was very reminiscent of chicken fesenjan, an Iranian chicken dish with pomegranate and walnuts.  I’m sure I’ll be making that dish again to post for you guys when I head back to the Middle East.  Until then, this is one darn tasty substitute. 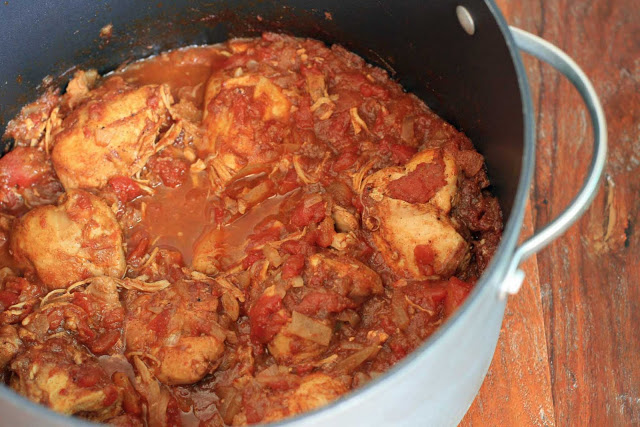 Heat the oil in a stockpot or dutch oven over medium heat. When the oil is hot, add the chicken and brown on each side. Add the onions and cook, stirring, until the onion has softened. Add the tomatoes, ginger, cinnamon, crushed saffron, and a sprinkling of salt and pepper and stir to combine.

Reduce heat, cover, and simmer for one hour. Remove cover and cook, until the tomatoes have begun to break down and most of the tomato juice has evaporated. Stir in the honey and harissa and cook until heated through.

Remove from heat, put chicken on a serving plate and sprinkle with the blanched almonds and toasted sesame seeds.