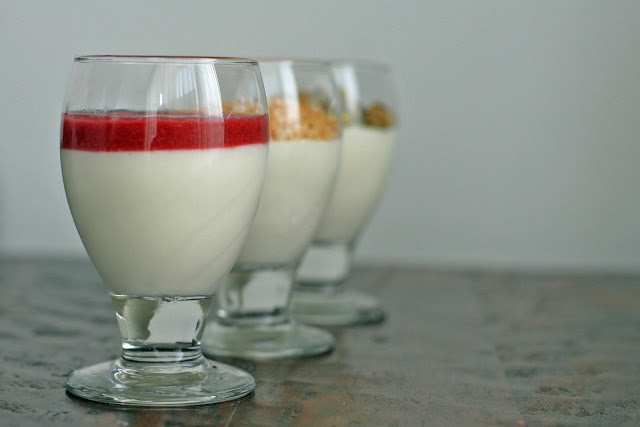 It was only after I chose Israel as one of my first culinary destinations that I learned a debate as to whether Israel has its own distinct and unique cuisine existed.  Apparently some people argue that Israeli cuisine is really just a collection of recipes from Jewish immigrants as well as recipes from its Arab neighbors.  But I’m not interested in the debate- I came for the food.

While Malabi is popular all over the Middle East (although it apparently goes by other names as well), it has become a staple dessert in Israel.  Wherever it’s from, it’s 100% amazing.

I snuck a couple spoonfuls while I was transferring it to my serving dishes.  My initial reaction?  Meh.  After it cooled?  Well, let’s just say the eight servings lasted about 24 hours in the house.

I topped the malabi with raspberries pureed with rosewater, toasted coconut flakes, pistachios.  They were all great.  Come summer I’ll be topping the malabi with a strawberry-rosewater topping.

Mix one cup of milk with the corn starch to make a slurry. Stir until the cornstarch dissolves completely.

Heat the remaining 3 cups of milk, heavy cream, and sugar in a saucepan and bring to a simmer.

Pour in the milk and corn starch mixture and cook over low heat until thick. Stir in the rose water.

Remove from stove and pour into serving glasses or dishes. Allow to come to room temperature. Refigerate until thoroughly cooled.

Top with your favorite fruit, nut, or syrup.