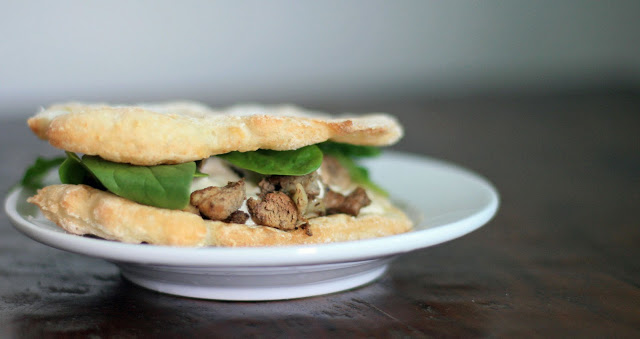 Think you’re not an offal fan?  This Jerusalem mixed grill recipe might just convert you.  Chicken livers and chicken breast cooked in a baharat spice mixture, drizzled with tahini sauce and served on flatbread with some greens.

The original version also called for heart and spleen, but Whole Foods didn’t carry any.  If you’re able to find either- and are an adventurous cook- feel free to add some in.

This is also traditionally eaten in a pita, but I haven’t had much luck making my own gluten-free version and so I served it on my favorite new flatbread.  I’ll share that recipe tomorrow.

Mix the chicken livers and breast with the onions, spices and olive oil. Marinate for several hours (up to one full day).

Heat a skillet and add the seasoned meat mixture. Cook, stirring, until meat has cooked through.

Serve on a pita, or gluten-free bread (or see my new favorite substitute), with some tahini sauce (recipe follows) and some greens.