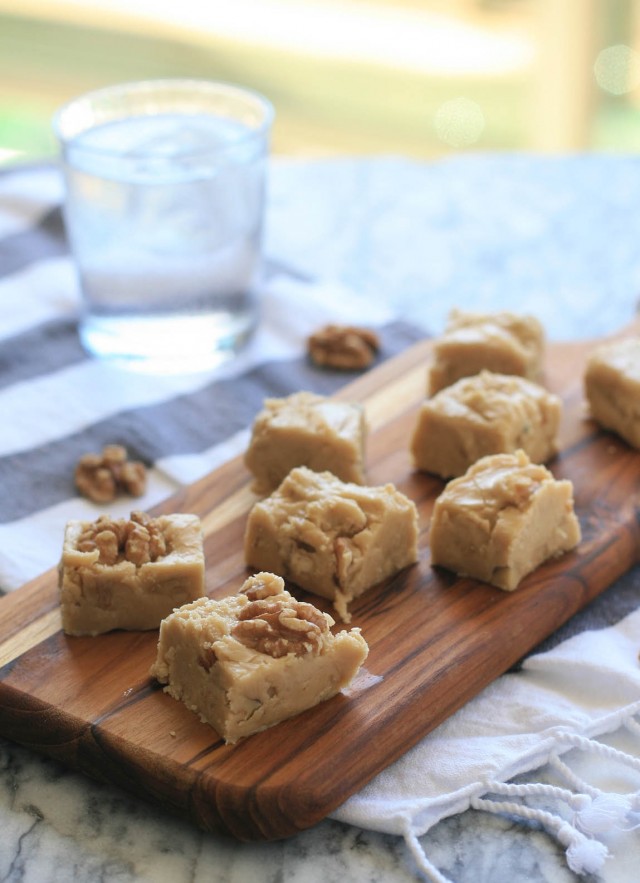 A couple years ago, when I was unable to travel to New England to see family for Christmas, my mother sent me a holiday care package.  Inside were some small Christmas decorations and some packaged goodies, including a large bottle of local maple syrup.

As part of my thank you, I’d made a batch of this maple walnut fudge and sent it back her way, which meant that some of that maple syrup logged about 10,000 miles in the span of one week.  Even after a couple days in transit I’d like to think it could compete head to head with the stuff from her favorite local fudge shop.

For years I botched batch after batch of fudge.  My mistake?  Not buying a candy thermometer.  Now, fudge-making is a snap, which only requires a few simple steps.

2. Boil mixture until it reaches the soft boil stage.

4.  Beat the mixture with a wooden spoon until it loses its gloss and starts to pull away from the pan.

That’s it.  Easy.  It’s just something of an arm workout sometimes.

Those aren’t the greatest photos ever, but I wanted to help illustrate the changes that can happen in just a couple swirls of a wooden spoon.  One second the mixture goes from very being very liquid and very glossy (and you wonder whether you made a mistake because you can’t ever imagine this stuff setting up properly) and less than a minute later, the mixture is matte and easily pulls away from the side of the pan.

This comes from a recipe from a friend of David Lebovitz.  Candy-making can be somewhat intimidating if you’re not used to it (if you follow the link you’ll see that lots of folks commented that they had problems getting the mixture to set up properly), but I’ve made this fudge successfully quite a few times… and I’m still very much a novice.

Just make sure you’ve got an accurate candy thermometer and try to make it on a clear, non-humid day.  But even if the fudge doesn’t set properly, I’m sure some maple walnut fudge sauce would be great on ice cream.  Or you can check out some advice for how to salvage a botched batch of fudge.  Practice makes perfect. 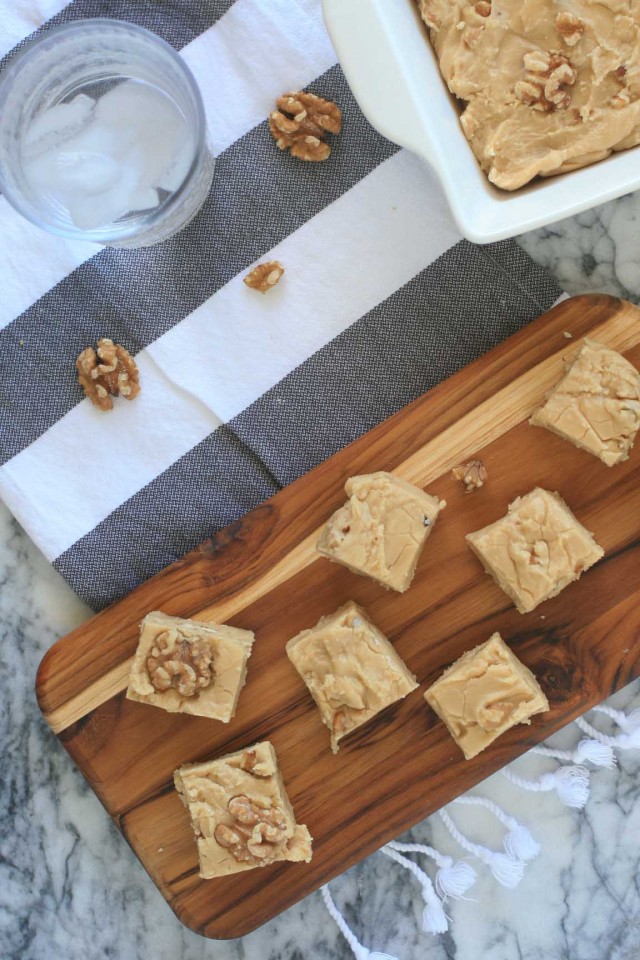 Combine the maple syrup, sugar, cream and corn syrup in a medium heavy-bottomed saucepan over medium-low heat. Heat gently, stirring occasionally with a wooden spoon, until the sugar has melted and the mixture is smooth. Stop stirring and increase heat to medium. Clip a candy thermometer to the side of the saucepan, bring to a boil and cook until the temperature reaches the soft ball stage, 236 degrees Fahrenheit. Remove from heat and let cool until the mixture has reached 110 degrees Fahrenheit.

Add the vanilla and beat the mixture with a wooden spoon until it just begins to thicken and loses its gloss. The mixture is just about ready when it starts to pull away from the pan. Do not over-mix.

Gently stir in the nuts and spread the mixture into the prepared pan. Allow to cool completely, then remove from the pan by lifting up on parchment paper overhand. Cut into squares.