Electric skillets are remarkable tools for anyone to have in their kitchen. Unfortunately, not everyone has caught onto its usefulness. They can be used to cook more foods at one time than ordinary skillets that are placed on the stove, and they can be placed anywhere in the kitchen where there’s an outlet. With one of these tools, consumers can cook everything from bacon and eggs to onion soup and just about everything in between. That’s why everyone should buy the best electric skillet they can find and put it to good use in their kitchen. This article is going to help our readers achieve that goal.

Presto is a company that’s been making small electric appliances and housewares since 1905, so it shouldn’t be surprising that a company that’s been making appliances for over 115+ years has gotten good at it. And after reviewing this quality electric skillet, we feel that they’ve gotten good at it. This appliance is designed to be useful to just about any kitchen and is large enough to handle the cooking needs of even large families. This model is approximately 19x12x8-inches in size, with a pan surface area of 15.75×11.87×2.87-inches. That’s big enough to cook a whole mess of food and also allows it to be used as a buffet server.

Another thing that we like about this product is that it appears to be quite durable. It has an aluminum base and a tempered glass cover that is designed to hold up to frequent use. Although we’ve found that the non-stick Teflon surface is easily scratched, which is an unfortunate flaw, we found this electric skillet to be otherwise well constructed. We easily see this model lasting the consumer several years, if not more, before the consumer has to buy a new one. And it’s all available for a price that’s quite reasonable and won’t cause an undue burden to the consumer’s pocketbook.

No review of a skillet would be complete without talking about the wattage and the features found on it, so we’ll talk about this model’s features right now. This is a 1,500-watt skillet with an 8-quart capacity that has stay-cool handles that makes it easy to use and move after it’s been used. Another great feature found on this model is that it has a built-in pour spout that allows it to pour soups or other liquids cooked in it easily. And once cooking is done, this skillet is extremely easy to clean. It’s a model that’s fully immersible and is even safe to use in a dishwasher.

Nesco is a company that can trace its history back to the 1930s when it was making quality roasters. And now it appears that they’re making quality electric skillets. Of all the models they’ve produced, it’s this particular model that we love. We love it not because it’s the most powerful or even because it has the most features. No, we love it because it’s small and compact, is durable, and is very inexpensive. No one is going to worry about busting up their budget when they purchase this electric skillet, and they are also not going to have to worry about this model failing before its time. It’s a quality model, small but powerful.

This is an 8-inch skillet features a die-cast aluminum pan, has an interior that’s deep enough for roasting and comes with a glass lid that’s designed to hold up to frequent use. It also has stay-cool handles that don’t get hot, so the user can move it around their kitchen, even after they have just used it. Another thing worth mentioning about this skillet is that it has a thermostat temperature control with a light, so the consumer always knows when it’s on and they can easily set it to the temperature they prefer. The thermostat goes from 275-degrees up to 425-degrees in 50-degree increments, so it can be used for a variety of different dishes.

If there is one thing that we didn’t like about this model, it’s the fact that it can be difficult to clean. That’s because it not only can’t be submerged in water, but it also can’t be washed in a dishwasher. That makes it a little less convenient than other electric skillets, but it’s other convenience features do tend to make up for it. One convenience feature we like is that it can easily be stored away in a cupboard or cabinet when the user is done with it. Of all of the skillet models that we’ve reviewed, we feel that this one is the best one for smaller households or with people who don’t have a lot of space for storing small appliances.

With 1,500-watts of power, a large 8-quart size, and a ton of features, this is probably one of the best deep dish electric skillets available. It’s a model that can be used for making onion soup, deep-frying chicken, making eggs and sausages, or even for making a tasty goulash. Just about any dish imaginable can be cooked in this skillet, and it’s large enough to serve large quantities of people at one time. It’s a model that has a 16×13-inch size, with 15-inch pan size. And it comes with a tempered glass lid that’s durable and very easy to clean. In other words, anyone looking to feed 6 to 8 people might want to try out this skillet.

This skillet has large sides that make it splatter-resistant, and it has a honeycomb non-stick surface that’s a little fragile but is PFOA-free. This model also comes with a trigger-release control probe, so temperatures can be pinpointed to prevent scorched foods or hot spots. Another thing that we didn’t like about this quality skillet is that it’s dishwasher safe, so it can be fully immersed to be cleaned. That makes cleanup a breeze and a lot easier than what is possible with other models of electric skillets. We also like the fact that this model has a cast aluminum body that’s resilient and is lacquer for rust-resistance.

It has adjustable temperatures from 200 to 400-degrees Fahrenheit, but it has handles and knobs that remain cool to the touch. This means that the consumer can use this skillet without having to worry so much about getting burned. This makes for virtually worry-free cooking for the entire family and also allows the skillet to be used as a buffet server. And because this model has a built-in pour spout, pouring out soup, stew or oil from it is quite easy. That makes this model perfect for anyone to have in their kitchen or to give away as gifts for Christmas, housewarming parties, or wedding gifts.

Now that we’ve seen some of the ingenious and useful electric skillets that exist, it’s now time to talk about how to procure one for our own kitchens. In this guide, we’re going to talk about how consumers can buy the best electric skillets available, as well as any tips and trips that come to our mind. If that sounds like a fun ride, then we ask all of our readers to come along for this ride. 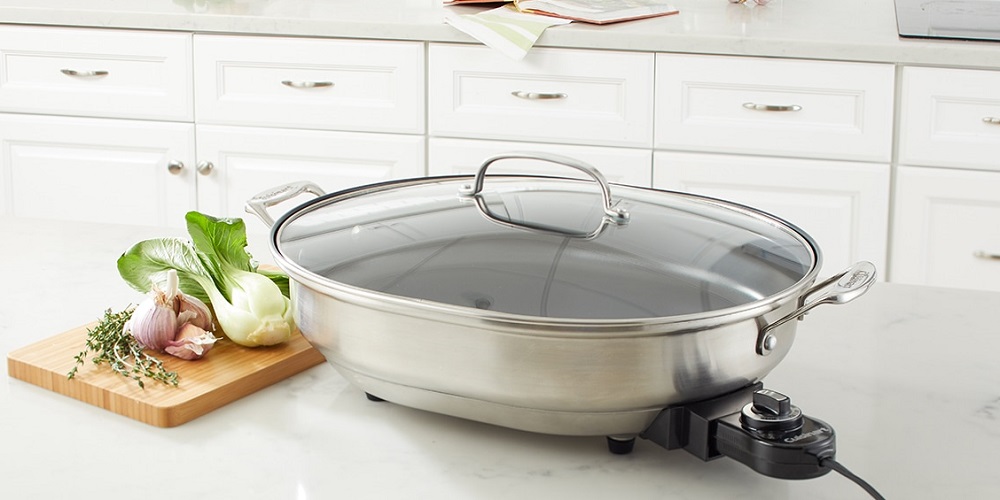 Step One: Decide On A Budget

Probably the first thing any consumer is going to want to do before they buy their next electric skillet is to determine the size of their budget. Not only do these skillets come in a variety of different styles and with a variety of different features, but they also are available in a variety of different price ranges. Some models are as inexpensive as $18 and some that cost well over $125, so there’s a skillet for just about every budget. For consumers looking for a good mid-range price for a new electric skillet, they can generally find on in the $25 to $50. Don’t buy too cheaply, however, because some features are worth a few extra costs, particularly features such as non-stick Teflon coatings, locking lids and drain spouts.

The next thing that home cooks are going to want to consider is the shape of the skillet. When it comes to most home electric skillets, consumers generally have three choices available to them: round skillets, rectangular skillets, and oblong skillets. In our opinion, rectangular and oblong skillets provide the user with the most surface area on which to cook, but we do understand that some consumers prefer round skillets and feel that they’re easier to work with.

The consumer should also give serious consideration to the counter space available. If the consumer has a counter that they can dedicate to an electric skillet, then that’s great because they don’t have to think about whether the skillet is going to fit. For the rest of us, however, we’re going to have to make sure that we get a size that’s appropriate to the size we have available. Fortunately, that’s easy considering that skillets come in sizes from very small to party-size models.

The next step in choosing the best electric skillet is to choose a model that provides the proper temperature levels. For most people, that means a skillet that can heat up to a temperature of 400-degrees, but for someone who needs to use the skillet as an impromptu deep fryer, then the consumer is going to need to go up to 450-degrees. It’s also a good idea for the consumer to choose a model that has a good temperature range. This will allow the skillet to be used for a wider variety of dishes.

Step Six: Consider Any Special Needs That May Be Needed

If the consumer intends on using their electric skillet to cook large meals or as a deep fryer for cooking fried chicken, okra or fries, then the consumer is going to want to make sure that they get a splash-proof model with high sides. These types of skillets also make braising or cooking certain types of foods a lot easier. It’s also a good idea for the consumer to choose a lid that has a high dome, this will increase the amount of food they can cook in the skillet.

Some Final Features To Think About