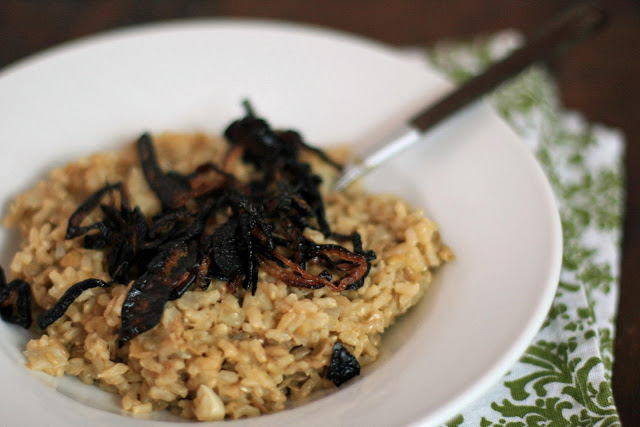 If this Israeli mejadra was in a one-on-one competition with my go-to Indian lentil rice pilaf, it might lose if judged as a one-item meal.  The Indian version’s addition of tomatoes, serrano peppers and a whole cumin seed tadka adds a lot more interest and complexity to the lentils and rice.

But where this recipe shines (in a wallflower sort of way) is as a side for a variety of meats and fish.  It was great topped with salmon with a herb sauce and is much more versatile than its Indian counterpart.

Bring 3-4 cups of water to boil in a saucepan over high heat. Rinse lentils and add to cooking water. Bring to a boil and then reduce to medium-low heat and cook the lentils in water until soft, about 20-30 minutes. Drain and set aside.

Heat olive oil in a saucepan and fry the onions until they begin to brown. Add the rice and cook, stirring, for 2 minutes. Add the lentils, cumin and season with salt and pepper.

Add three cups of water and bring the mixture to a boil. Reduce heat to low, cover and cook for 30 minutes, or until all of the water has been absorbed. Remove from heat and let stand 10 minutes. Serve with fried onions (see below).