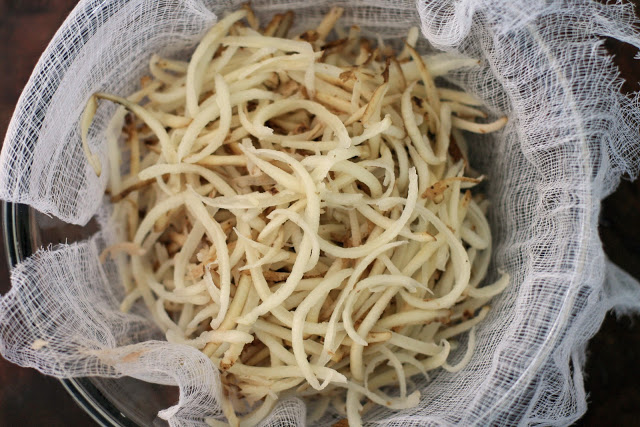 I’m sure you guys realized that a potato recipe would be coming sooner or later.  One of Ireland’s favorite ways to use their most famous vegetable is by making boxty.  Boxty recipes vary widely: some included mashed potatoes or milk while others didn’t and some had just a smidgen of flour while others included more than a cup.

I decided to go with what Darina Allen, a well-known Irish chef, calls Pan Boxty.  If you’ve had rösti before, this will look familiar.  Everybody else: just imagine a giant latke.  In some ways, this pan boxty recipe is unique for what it doesn’t include, namely eggs, wheat flour or onion.   You won’t miss them; this boxty is like a giant and buttery hashbrown that’s crispy on the outside and almost fluffy and creamy on the inside.

The key to this recipe is the technique.  After grating the potatoes and squeezing out the liquid, you let the liquid separate into water and potato starch.  You then add the potato starch back to the shredded potatoes.  An extra step, but an important one:  the starch will help bind the potatoes since there’s no egg or gluten.  Also be sure to let the boxty cook slowly, you don’t want to brown the surface before the inside cooks.

And if you need another reason (besides taste) to make this, I’ll leave you with an Irish saying:

Boxty on the griddle

Boxty in the pan
If you can’t make boxty

You’ll never get your man.

Carefully drain off the liquid, retaining the potato starch at the bottom of the bowl. Add the shredded potatoes and rice flour to the starch and mix well. Season with salt and pepper.

Melt one to two tablespoons of butter in a large, heavy-bottomed skillet over medium heat. Spread the potatoes into the pan; it should be about one inch thick. Let the mixture cook very slowly over medium heat until browned, about 15 minutes, before turning the boxty over to cook the other side, another 10-15 minutes. Add more butter if necessary/desired.

Cut into wedges and serve.