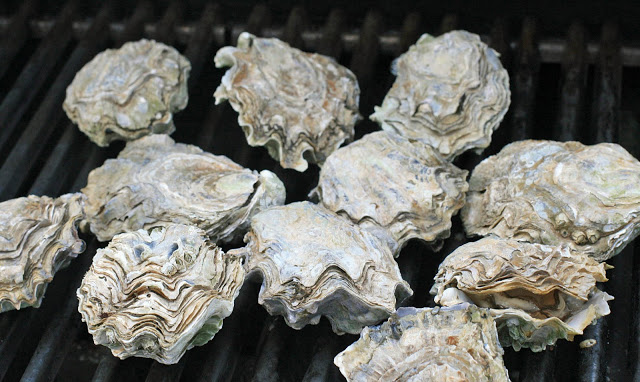 Oysters have been an extremely important shellfish to the Irish for centuries and so I thought now was the perfect time to reacquaint myself with these little guys.  I’d eaten one raw on the half shell years and years ago at a party.  I clearly didn’t love them as much as my fellow party-goers and so I left my share for the hard-core oyster fans and probably diverted my attention to a platter of cheese.

The high cost of oysters, along with my cheapskate ways, have kept me away from trying them again in recent years.  But a recipe for Oysters Baked in Garlic and Herbs in The Irish Pub Cookbook made me want to give oysters another go.

I was blithely unaware of the difficulty of shucking oysters when I bought them… and then internet accounts of oyster shucking gone wrong pretty much scared the pants right off me.  Texts were sent out to oyster-loving friends to see whether anybody had an oyster knife I could borrow.  Nobody had one.  Why?  Out here pretty much everybody just throws them on the grill and they open up themselves.  So I rolled with the punches and tweaked my original plan; the oysters got grilled and topped with seasoned, toasted breadcrumbs.

In the end everything worked out.  The oysters were great and I got to keep all of my digits intact- a real win-win… 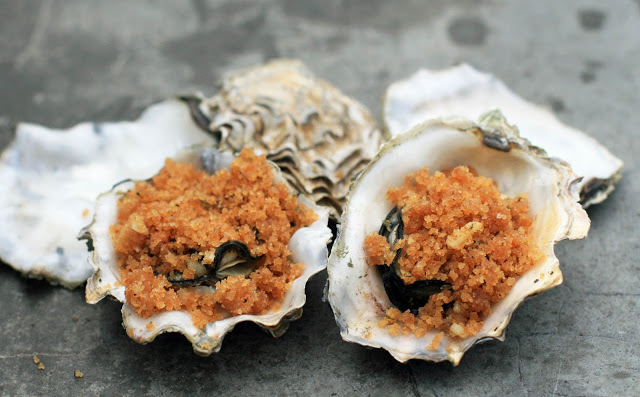 Clean the oysters by scrubbing the shells with a stiff brush under running water.  Rinse well.

Heat the grill and place oysters on the grill grate so that they’re resting on their deeply curved halves of their shells to ensure that their juices don’t run out.

Remove oysters from heat when their shells just start to open – for me it took between 4-7 minutes.  Use a butter knife to open the shell and cut the oyster meat from the shell.  Top with the garlic butter

Stir yeast into warm water and set aside for several minutes.

Combine all of the the ingredients in a large bowl and stir.  Add the yeast water mixture and use an electric mixer to blend together for one minute on medium speed.

Spoon dough into prepared pan and use a wet spatula to spread the dough evenly in the loaf pan.  Bake for 40 minutes.  Remove bread from the oven and let cool on a wire rack.  Slice bread very thinly.  Place slices in a food processor or a blender and process until fine crumbs appear.  Store in a tightly sealed container or plastic bag in the freezer.

How to Naturally Treat Hives

5 Tips For Smart And Healthy Snacking