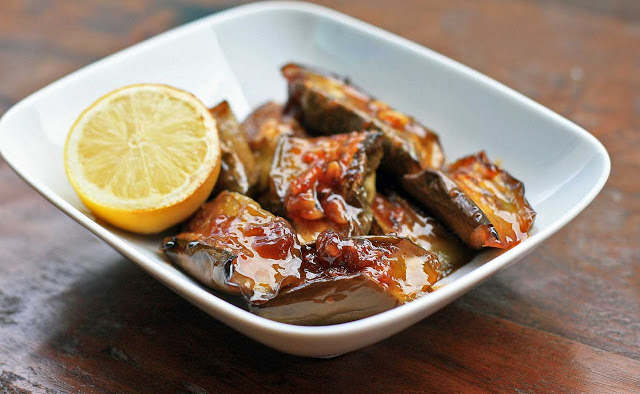 Hot, sour, salty and sweet, this eggplant dish has got it going on.  I know in my head that this is a Moroccan dish, but I keep thinking of American Chinese food, a la P.F. Chang’s.  And I mean that as a compliment.  The eggplant are broiled and then cooked in a spiced harissa-honey mixture until the sauce is thick, sticky and coats every piece of eggplant.

This time I stuck with just eggplant but it would make an amazing meal with some chicken thrown in.  If you’re looking to go that route, I would stir-fry about a pound or so of chicken with the garlic until just cooked through before adding the eggplant and triple the amount of the honey-harissa sauce.  Served with some rice, it could be a quick, exotic weeknight meal.

Preheat your oven to broil. Lightly grease a 9-inch by 9-inch baking dish and place the eggplant in a single layer. Broil several minutes, until lightly browned and flip the eggplants to brown on the other side. Remove from oven.

Heat the oil in a large frying pan over medium heat and add the garlic. Fry for about a minute and then add the ginger, cumin, harissa, honey and lemon juice. Arrange the eggplant in a single layer and cook about five minutes. Flip the eggplant and cook until the sauce is thick and syrupy and has mostly been absorbed by the eggplant.