Anyone who wants to make a great sandwich only needs four things: a great cheese, a slice of great luncheon meat or filling, tasty bread, and the best panini press that they can find. Now that we think about it, the panini press, or panini grill as some people call it, is probably the most important part of that entire equation. A great model creates a sandwich that simply can’t be beaten. That’s why we’ve taken it upon ourselves to find the best models available. After all, we feel the world would certainly benefit from the creation of more great sandwiches.

As might be expected, the first thing that we noticed about this stainless steel panini press is that it looks very nice. It easily looks like a small kitchen appliance that’s worth twice what it’s the actual price is. Its great looks aren’t what makes this an impressive tool for making sandwiches, however. It’s this model’s fine array of features that make it worth using. This model has an LCD display that alerts the user to functions currently in use, displays a timer as well as the current temperature. If there’s one complaint that we had about this grill, it’s the fact that it looks a lot smaller than what it looks like in its promotional photos. It’s not too small to be useable, but it’s small enough to make most people take notice.

Even though it wasn’t as large as we expected it to be, it was still an amazing tool for making sandwiches. Its temperatures could be adjusted anywhere from 175-degrees to 450-degrees, so the consumer could make all kinds of different foods. It could be used as a panini press, a contact grill or even as a griddle. And it also has a handlebar that makes the press easy to use. This model also has a sear function that can be used to make some marvelous panini sandwiches. And since it comes with an instruction manual and a full set of recipes, consumers can use put this tool to work almost immediately.

Cleaning up this grill is also pretty easy to do. It comes with a scraper that can be used to clean the grill and its reversible plates can be removed and washed in the dishwasher. That makes cleanup after making lunch a lot easier than it is with other types of grills. All of these features, as well as those we haven’t yet mentioned, make this press the perfect one for just about any kitchen.

Another panini press that we like quite a bit is this one from Breville. In our opinion, it’s a perfect combination of style and function, so it deserves a place in just about everyone’s kitchen, or at least the kitchens of people who want a fabulous panini grill at their disposal. This model has a classy stainless steel exterior and integrated lights that tell the user that the unit is on and when the unit is ready for use. It’s also equipped with non-slip feet that keep it from sliding around the counter and a cord wrap. It’s also approximately 13×11.75-inches by 5.25-inches.

This panini grill also scratch-resistant Quantanium cooking surface that is heated up by a 1,500-watt element. That allows this grill to be used for cooking not only sandwiches but a variety of other food types. It’s also a grill that’s easy to use because it has a flat bottom plate and a ribbed top plate for making grill marks. It also has a floating hinge, four different height settings, and a locking storage clip. The one thing that we didn’t like about this press is that its plates weren’t removable, so they can be washed in the sink or a dishwasher. That’s not generally a problem because the surface is nonstick, but it could become one if cheese becomes burned on its surface.

We also appreciated the fact that this model came with an informative instruction manual and recipes as well. That allows the user to quickly press this grill into service for making brunch, lunch or dinner delights. We also like the peace of mind provided by the fact that this press is backed by a 1-year limited manufacturer’s warranty. Although this might not be the best panini press available, mainly because it doesn’t have removable plates, but we have to say that it does come pretty close to being perfect.

It might be too easy for some people to categorize this panini grill as just another cheap kitchen appliance, but that would be a mistake. Although it is a basic, inexpensive model that doesn’t have all the features that the name brand models have, it is also one of the best budget panini presses we’ve ever seen. And this is true, even though this product doesn’t have an on/off switch, doesn’t have an automatic shutoff feature, and has a cord that’s barely long enough to reach the wall outlet. It’s a model that features a large nonstick surface that can be used not only as a panini press but can also be used as a grill as well.

This model’s nonstick surface offers over 70 square inches of cooking space, which is enough for a family of four to easily make burgers, sandwiches or pork chops on. And for convenience, this model has a floating lid that’s easy to lift up and out of the way, and a slide-out drip tray that can be pulled out and thrown into a dishwasher. This model also has a compact design that makes it extremely easy to put away for storage. This allows it to be used in just about any kitchen, regardless of how large or how small the kitchen is.

The last thing that we would like to say about this panini press is that it just works. It reaches cooking temperature quickly and its surface seems to heat evenly. That makes it a great tool for making Reuben sandwiches, cheeseburgers, or just about anything else a person could want. So consumers shouldn’t worry about its inexpensive price-tag because it’s a great model for consumers to buy.

How To Buy The Best Panini Press

Once a person realizes that panini presses can be used for making a variety of tasty dishes, they’ll waste no time trying to find a great panini press. That’s because once a person has had a sandwich that features that toasty grilled bread encasing a warm interior of meat and melted cheese, an ordinary sandwich will seem, well ordinary. Of course, consumers aren’t going to want to run out and buy just any old panini press they come across. No, they’re going to want to buy the best one possible. And that’s why we’ve decided to write this guide. In this guide, we hope that our readers will find all of the information they need to buy one that suits their needs quite well. 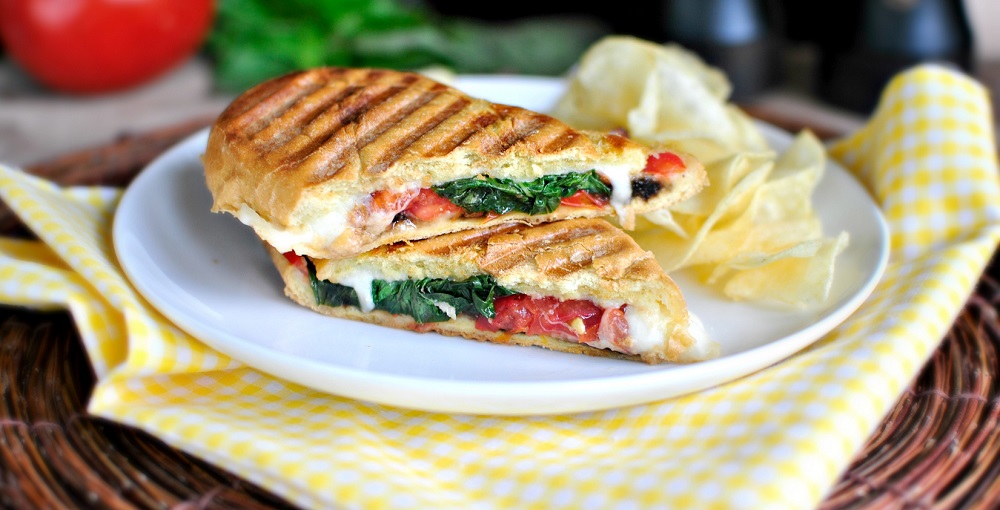 Step One: Look For A Decent Size Grill Area

The first step to finding the best panini press is to consider the surface area that is needed. For a family of four, a surface area of approximately 70-inches or larger is more than large enough, but we understand that not all individuals need a grill that size. And that’s when the consumer might want to consider buying a budget panini press model. That’s because the main difference between high-end panini presses is the size of the cooking area. High-end models tend to have larger surface areas, although that’s not always the case. Regardless, the consumer should buy the size grill that most suits their needs and their budgets.

Another thing that consumers might want to consider is whether the press has a thermostat or not. As a general rule, most high-end models have adjustable thermostats, while most low-end budget models don’t. While this makes little difference when the grill is going to be used exclusively as a panini press, it makes quite a bit of a difference when the grill is going to be used for other purposes such as making burgers or steaks. Burgers and steaks tend to need to have a higher cooking temperature than panini sandwiches, so if a person wants to make those dishes, then they better get a grill that has an adjustable thermostat for the best results.

Step Three: Floating Hinges Are A Great Feature To Have

Some grills don’t have an adjustable height, and then there are grills with floating hinges that can easily be adjusted. And the difference between the two models is staggering. This feature allows the press to be more easily used for a greater variety of foods. For example, suppose a person wants to cook a grilled cheese sandwich one day, but the next day they want to make a panini sandwich on thick Italian bread. Using a grill with a floating hinge makes that transition a lot easier. Fortunately, most of the panini grill out there, even budget models, now use this feature, so it’s not too hard to find a panini press with a floating hinge.

In our opinion, a removable plate is one of the most important features on this list. This feature allows the presses’ plates to be removed so that they can either be hand-washed or thrown in a dishwasher. This makes cleanup a whole lot easier, especially if there’s something burned on the grill’s surface. Fortunately, most high-end panini presses have this feature, although some don’t. It’s also a feature that’s notably absent among budget models, so if the consumer is going to want this feature, then they’re going to have to spend a few extra bucks. We feel like the added cost is worth it, but not everyone may agree.

What Can Be Made In A Panini Press?

Top 7 Dishes You Should Definitely Try in the USA