In the eyes of most consumers, induction cooktops must seem like magic. That’s because the cooktop remains nice and cool to the touch, but metal containers placed on its surface heat up quickly. This allows home cooks to prepare meals on the device without worrying about getting burned. Of course, not all models work the same, so the consumer should take the time to find the best models available. To help consumers achieve that goal, we’ve listed not only the best portable induction cooktop models, but we’ve also created a handy guide that will help them sort out which features they need and which ones they don’t need.

The NuWave PIC Flex is a portable induction cooktop that’s lightweight and can literally be taken anywhere it’s needed. Need to cook at home, at the office, or a friend’s house? Well, now it’s easy thanks to this quality appliance. This model is only approximately 6x16x13-inches in size, and only weighs 4.25-pounds, yet it’s capable of accomplishing some truly remarkable features. Its cooktop surface stays cool to the touch, but cookware placed on it can be heated to cook a variety of different meals. It doesn’t matter if the user needs to cook bacon and eggs, burgers or steaks, this cooktop is ready to be of service. And might we add, that it does all of this quite easily and at a lower cost than some of its competitors.

Another thing to like about this model is how easy it is to use. This model has an LCD and 45 temperature settings that allow the cooktop to be adjusted from 100-degrees Fahrenheit all the way up to 500-degrees Fahrenheit. This model also comes with a 9-inch anodized ceramic non-stick frying pan that can be used with it. This model delivers a blistering 1,300-watts of power but still manages to use up to 70% less energy than an ordinary kitchen stove. That makes it a revolutionary product that most consumers are at least going to want to consider. It’s certainly a great appliance that can replace old-fashioned hot plates.

We’re going to start off this review with one of the most prominent complaints that people have about this portable induction cooktop. Most people have found, as we have, that the fan can be a bit loud at times. And that’s true, although we weren’t as bothered by it as some other people might be. However, we also didn’t think the sound of its fan is worth knocking it down in our review because, in our estimation, this model does just about everything else right. It’s a quality cooktop that heats up quickly, maintains temperature well and is portable enough to be taken just about anywhere. Now that we’ve covered the one negative this appliance has, we would like to turn our attention to the array of positive features that consumers can expect out of this appliance.

This model is only about 11.4x14x2.5-inches in size, but it delivers up to 1,800-watts of power. This model is also extremely adjustable and can be set to one of twenty different temperature settings, from 100-degrees to 460-degrees Fahrenheit. This model also doesn’t weigh a whole lot, so if it has to be taken over to a relative’s house for the holidays, it isn’t a chore at all. This model is also equipped with a handy sensor touch control and an LCD display that makes setting its temperature or its programmable timer a lot easier. And because it’s packed with plenty of safety features, consumers don’t have to watch it as closely as they do other induction models. Some of the safety features built into this cooktop include over-heat protection, high-voltage warnings, and auto-pan detection.

Although this portable induction cooktop is a little bit bigger than most of the other ones on this list, which might put some people off, we found the increased size quite useful. It doubles the amount of food that can be cooked on it, and its 14.2×23.6×2.6-inch size isn’t all that bigger than most portable models. Besides, it allows the cooktop to incorporate one of its coolest features, which is a dual heating zone. This dual heating zone allows each of the two zones to be individually set, so consumers can keep both “burners” at different temps for cooking different things. Another thing that we liked about this cooktop was that it had multiple cooking modes. With just one press on the unit, we could switch from fry mode to steam mode to water boil mode. There’s even an automatic warm function that can keep food until it can be served.

It’s also worth mentioning that this cooktop is energy efficient, so it won’t drive the user’s electric bills out of control. Other features that can be found on this quality cooktop includes a child-safety lock that prevents unfortunate accidents, high-power heating elements, sensor touch controls, a digital LCD display, a compact style that can be easily placed on most counters, and a countdown timer setting. It also features a stain-resistant surface that’s easy to clean and maintain. All things being equal, this is a great portable double induction cooktop.

Not only is this model portable, measuring only 15.9×12.5×4.1-inches in size and weighing slightly less than 6-pounds, but it’s also one of the more inexpensive models available as well. This model is approximately half the price of many other induction cooktops, yet it doesn’t skimp on any of the major features that consumers would expect out of it. This model has 9 power levels that can be adjusted from 150-watts up to 1,800-watts, and temperature ranges that go from 140-degrees to 460-degrees Fahrenheit. It’s also ETL approved for safety and includes not only a timer setting but a pause setting as well.

This model also looks very nice and has a full glass panel that’s easy to clean and smart sensor design with a handy LCD display. As is the case with all inductive cooktops, only pots and pans that are made of steel or cast iron can be used on them, and if those types of cookware aren’t used, then this model won’t heat up. That’s because it’s equipped with a sensor that knows if the appropriate cookware is being used on it. Some people might find it a pain, but in the end, it makes the product a whole lot safer to use. Another safety feature found on this cooktop is an overheat sensor.

A Guide To Portable Induction Cooktops

Now that we’ve piqued the interest of our readers with some of the best portable induction cooktops available, it’s now time to help our readers determine which models might be right for them. Although these cooktops might all look the same, not all of them have the same features, so consumers should take their time and find out which models will work for them and which models should be left alone. To help our readers sort out the important features from the not so important features, we written this guide. A guide that should make shopping for a new portable induction cooktop a lot easier. 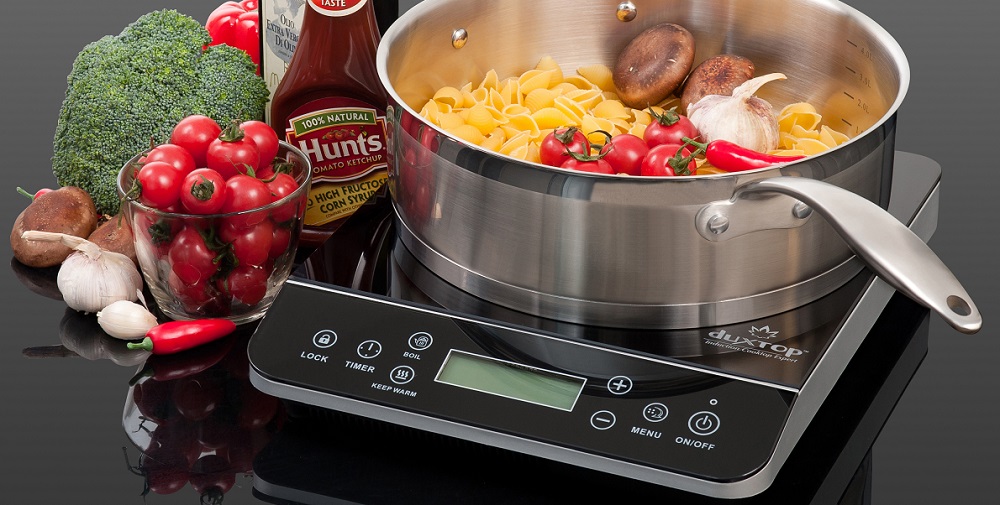 The amount of counter space a person has available to them is probably the most important thing for any consumer to consider before they buy an induction cooktop. Although most of the portable models have a slim design and don’t require a whole lot of space, some of the portable double cooktop models can take up a considerable amount of space, so it’s important to compare the size of the cooktop against the space that is available in the home.

Another thing for the consumer to think about is how powerful a device they need. Most portable models are somewhere in the 1,800-watt range, which is a pretty good power rating for an appliance this size. Of course, some models are as powerful as 3,600-watts, but many of those are quite expensive, so most consumers are going to want to choose an induction cooktop that’s somewhere in the 1,300 to the 1,800-watt range.

Although one might assume that the power range of a cooktop would inform a consumer of the temperature range the appliance can achieve, that’s not the case. Some high-power models only go up to 450-degrees, and other lower-powered models that can be set up to 500-degrees Fahrenheit. It’s up to the consumer to find the temperature spread that works best for them and one high enough to cook what they need to cook.

Choose One With Safety Features

It’s also a good idea to choose a cooktop that incorporates some safety features into its design. The better portable induction cooktops have child-safety locks that prevent children from turning the cooktop one, but there are other safety features that a cooktop might have. Some of the more popular safety features available include overheating protection, over-voltage protection, and sensors that detect whether the appropriate cookware is being used.

Other Features To Seriously Think About

Of course, there are a bunch of other features that we haven’t even gotten to yet, so we decided to go ahead and put them in this section. The following features are a few of the things that consumers might want to consider before they run out and buy the newest induction cooktop. These features have made it on this list because they extend the usefulness of the cooktop or make it easier to use, so consumers should feel free to consider the ones they find useful and disregard the rest.

Now that we’ve talked about how to buy the best portable induction cooktops, we would like to end this article on one final note. Consumers need to realize that not all cookware will work with these appliances, so they need to make sure their cookware is compatible with their cooktop. As a general rule, steel, cast iron or enameled cast iron cookware can be used with these cooktops, but it’s always a good idea to check first before committing to a particular model.

Protein Pancakes: How To Make A High Protein Breakfast