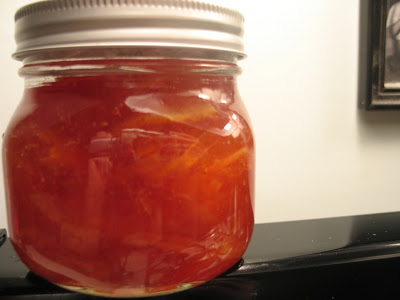 I wonder what jam might be going though this month… “all i ever hear is marmalade, marmalade, marmalade!” …as she goes rolling to the back of the larder and throws herself on the shelf, glass first. Yes we did a lotta marmalades this month. it was so great to see so many versions and techniques …and citrus!

and pretty incredible to read all of your posts, so much enthusiasm, so much creativity, …so many citrus! my friends, we are off to one hell of a jam! just look at what we did!: 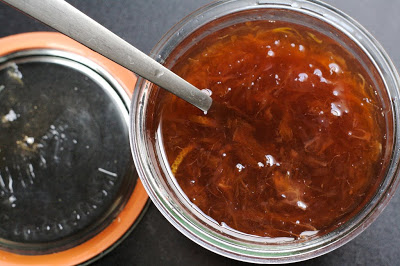 blood orange marmalade – rufus & clementine tenacity? i’ll say; at first she didn’t like the set, so she popped the tops, added the juice and bam! -perfection!

blood orange marmalade – sticks rocks and dirt sara says she has a problem: now everytime she goes to the store she wants to buy more citrus to can. problem? what problem?

blood orange and meyer lemon marmalade – the kitchenette here’s to getting your lids popped…no more canning virgin. congrats! it does look lovely. (be careful about the headspace though, i see a bit too much in that back jar)

blood orange port ginger marmalade – the 3 canners i particularly like the last ingredient – but don’t you think you should add a 4th? (for moi!)

buddhas hand jam – cafe del manolo manny talked to the hand – buddha’s that is. adding liquor to a divine citrus part? blasphemous, i tell ya, but delicious i bet! and what’s this!?

citrus marmalade with dried apricots – better gardens than home mmm…we like a turkish twist – (no that’s not a dance, it’s dried apricots, sillies!)

chili orange marmalade – for better or worsted not spicy enough? maybe try some little thai babies next, or some haba-haba-habs! yowch!

easy microwave meyer lemon marmalade – put up or shut up! forget the complicated kumquats! you should know nina – less is more. thanks for the easy breezy marm!

four (and a quarter) fruit marmalade – flamingo musings no bitterness in the citrus party in a jar! or if you like a little bitter-umph try her ruby red grapefruit marmalade

grapefruit marmalade – the artisanry of acorn cottage alison took a page out of nigella’s book…it’s all about the boiled fruit.

grapefruit marmalade??? – fotos by meg a marmalade newbie, she tried but maybe didn’t conquer…that’s ok cause feb’s around the corner!

honey clementine marmalade – outpost 505 be careful with the headspace – it looks as if it’s coming up short. unpreserved preserves aren’t fun. (but otherwise it looks lovely)

kung fu lemon marmalade – the wynk i have to oh, and the marmalade? it’s bitter and peppery…score one for melissa!