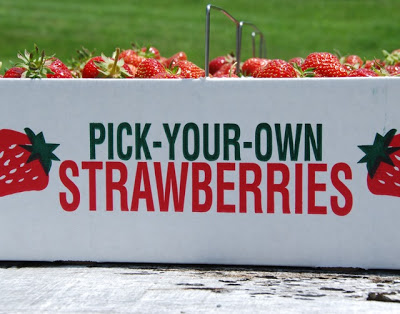 Actually we already went, Julia, Kate, Shae and I. We had fun and of course we ate; took photos of what we ate of course. …so then I got home with 15 pounds of strawberries. I escorted about a pound of the cutest, easiest looking ones (more on that shenanigan in the coming days).

6 lbs were rinsed, hulled, tossed with the juice of two lemons & 7 cups of sugar, and put in the fridge to relax. …and it’s really quite amazing how fast the remaining 7 or so pounds just disappeared. I didn’t make anything else with them, they just kinda vanished into chomping teeth.

If you know what I mean. Anywayz, back to the 6 lbs in the fridge: 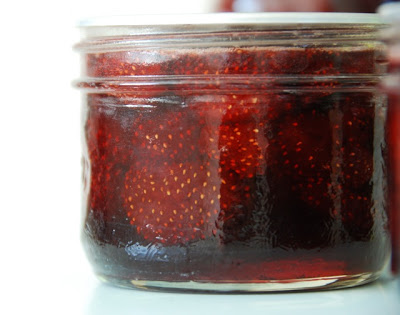 First, you must know that strawberries are not the easiest thing to set up for a year’s worth of boxed-pectin free preserves.

I mean, in theory they are. But if you’re really aiming for a true preserve, not a syrup, and you want the fresh taste of the berry to shine, with not a trace of that over-cookedness that can happen so easily in the thick of things – or the attempt there of. Then it takes a little know-how or a little luck or some of these:

First, I split those 6 lbs into 3 & 3. Put the first of such in my preserving pot and brought it to the boil. Let it cool and put it back in the fridge for another night of rest and did the same with the other half.

Next day, I also did the trick (still in two batches) of separating the now-condensed berries from the syrup, boiling the syrup quickly to 221 degrees before adding back the berries; bringing the whole thing back to the boil and cooking until the setting point.

These things peeps, I have done quite a few times in summers past. In summers past once those berries were added I had to cook, and cook to get that syrup to set. If I didn’t want to cook, and cook, because I wanted the bright berryness to remain, then I had a bright tasting strawberry syrup.

But this year is different, this year I managed to pluck (just barely) enough final hangers-on off of my three wee gooseberry bushes to garner 1 & 1/2 cups of gooseberry pectin*

And though I haven’t mentioned this one to you before – there’s a staple strawberry preserve in my repertoire, whose flavor-combo we adore, but who each year is riddled with the above.