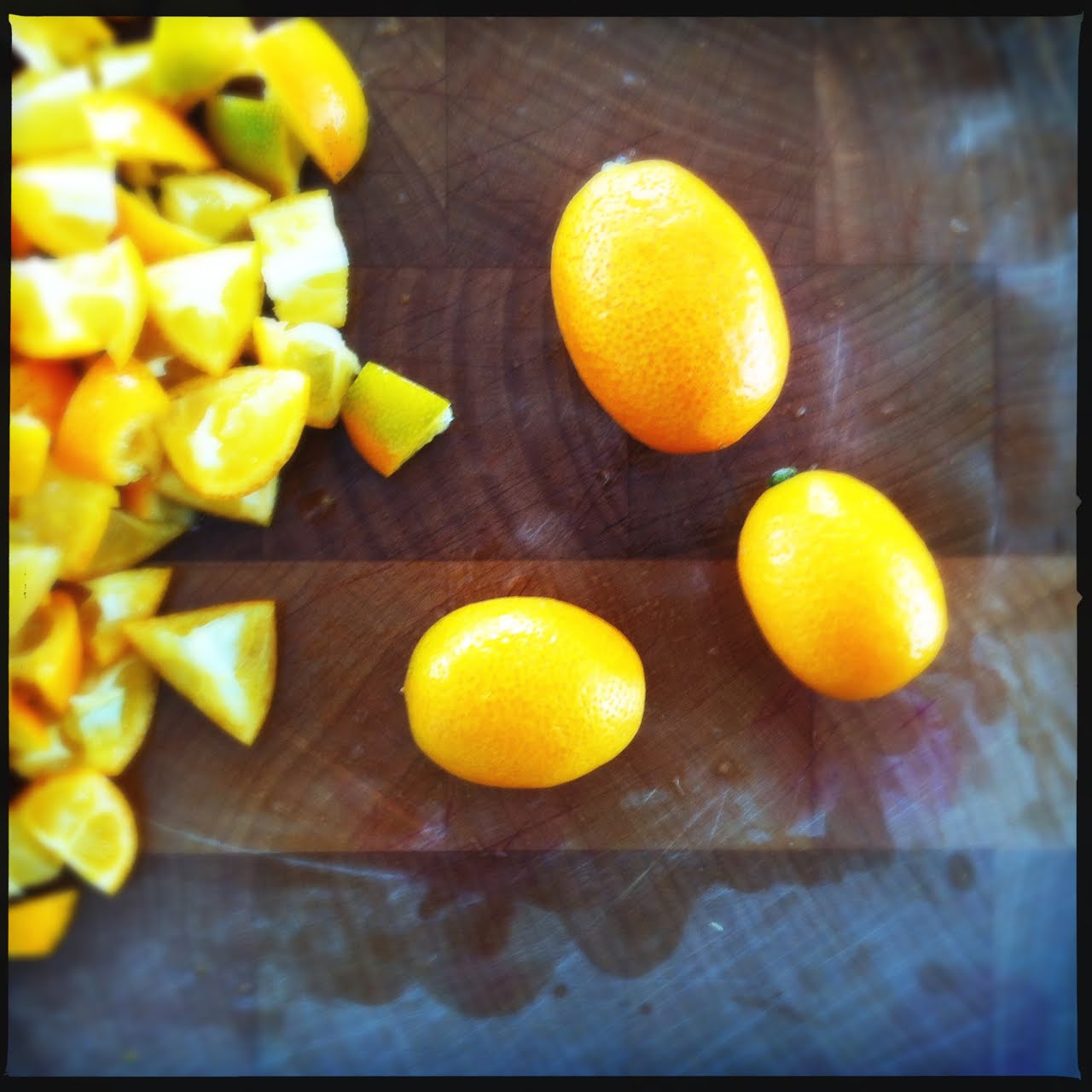 This is the last of my 10 pound batch – ordered from here quite some time ago. as you may know, i love kumquats, those not-so-sour fruits that half-heartedly roll around masquerading as pucker-inducing citrus. i swear, they must have to practice. but i’m not fooled.

these little guys are sweeties!

having just returned from a trip to british columbia to find my last couple pounds of ‘em barely hanging on to their youth, i had to quickly devise a plan to get them sealed up in jars.

kumquats always make me think of places far, far, east – places i’ve never been. chinese 5 spice powder, or some variation of it, is ubiquitous in that part of the world. using that as a jumping off point, this is what i did: 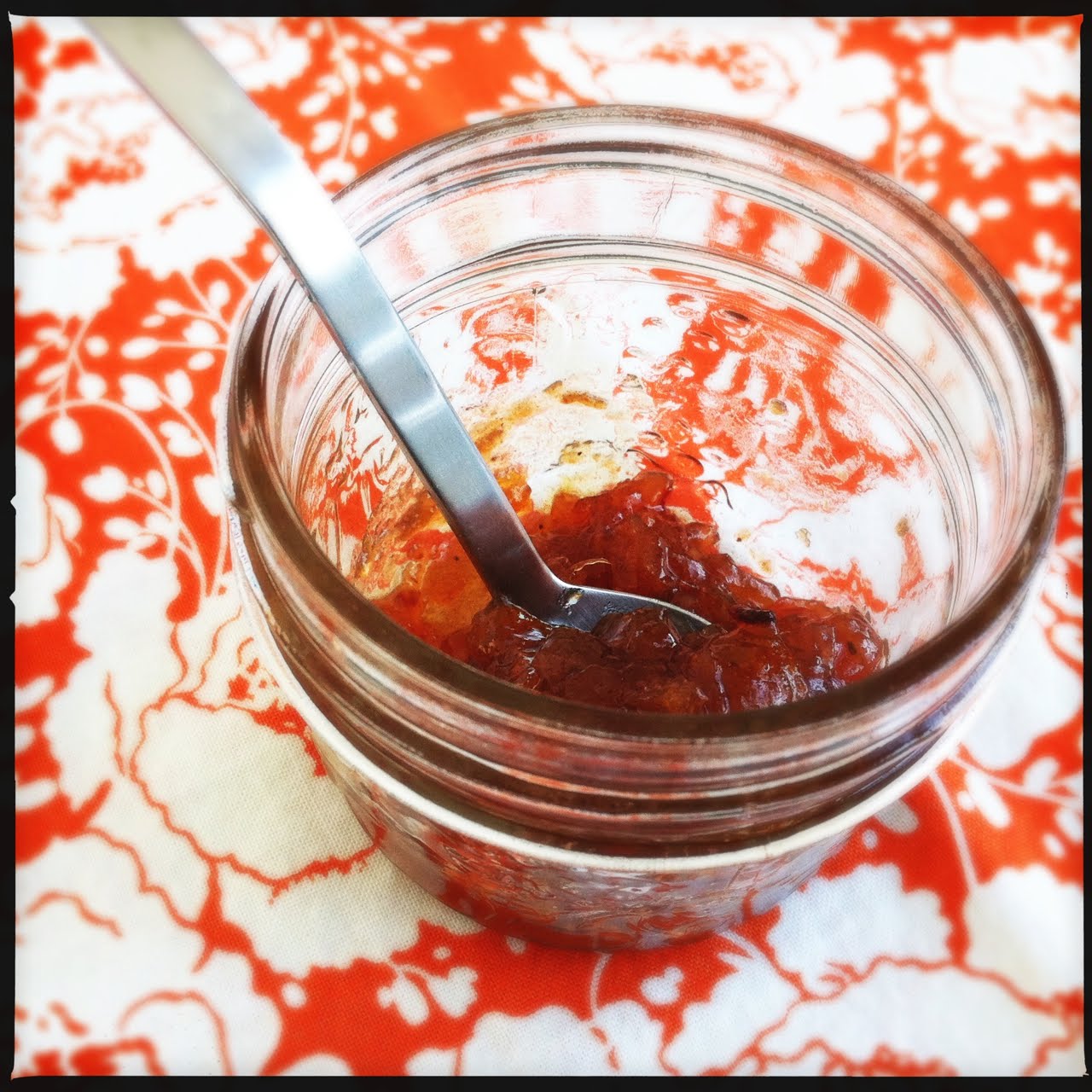 well actually, hold on, let’s back up. first, i climbed to the top of my larder, reached my paw behind the skull and crossbones sign, careful not to disturb the trap, and pulled out my secret chile basket. 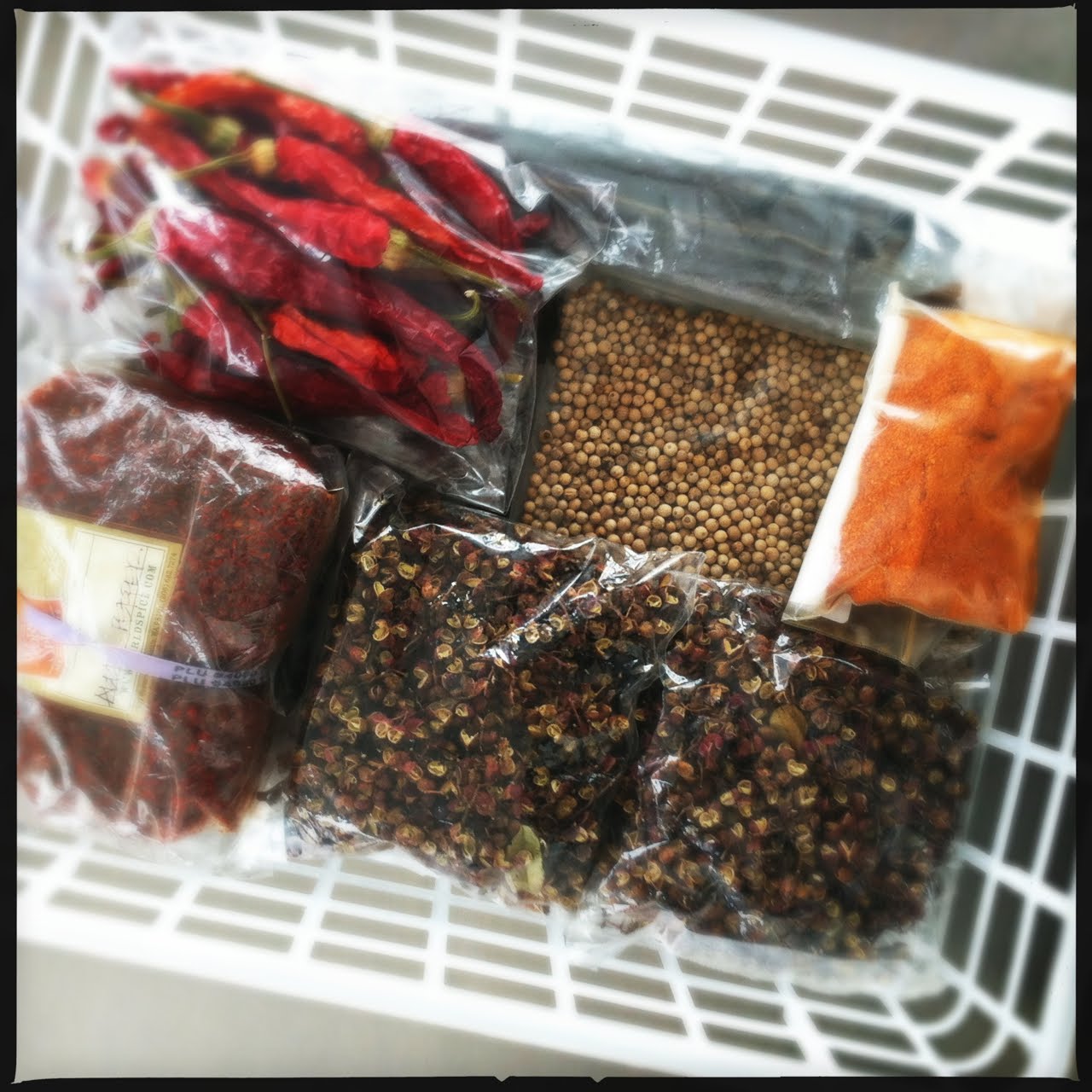 (i just realized we must truly be chummy cats now, ’cause i’m telling you about my hidden chile basket!) yes peeps, this is my basket full-o’-hot-gold gathered from around the globe. there’s more underneath, but what you can see is aleppo-style pepper from turkey, white peppercorns from kerala, new mexican chile powder, the whole red chiles are from a particularly succulent bush from thine own garden, and, ok, there’s some real cinnamon from sri lanka on the side there. but, what you really want to know about is the two bags in the front, brought back by yours truly from bhutan, where it’s called local pepper, but what’s otherwise known as szechuan pepper.

it’s the real deal, not the unfortunate pink and white peppercorn mix mislabeled here in the states, no no. upon having my first – and probably a little bit too much – taste of szechuan pepper, my throat, lips and chest became tingly and then numb, and my tongue, of it’s own accord, stopped behaving inside my mouth and took a leap way out and south. it is, in fact, the stuff legends are made of. but that was not the half of it. while all of this was happening, and in what was certainly not our coolest traveling moment, it sent M running from the restaurant, gasping for breath, both hands pulling at his shirt collar, and me running after him, tongue fully exposed, yelling, “ah you ahlight?” respect. 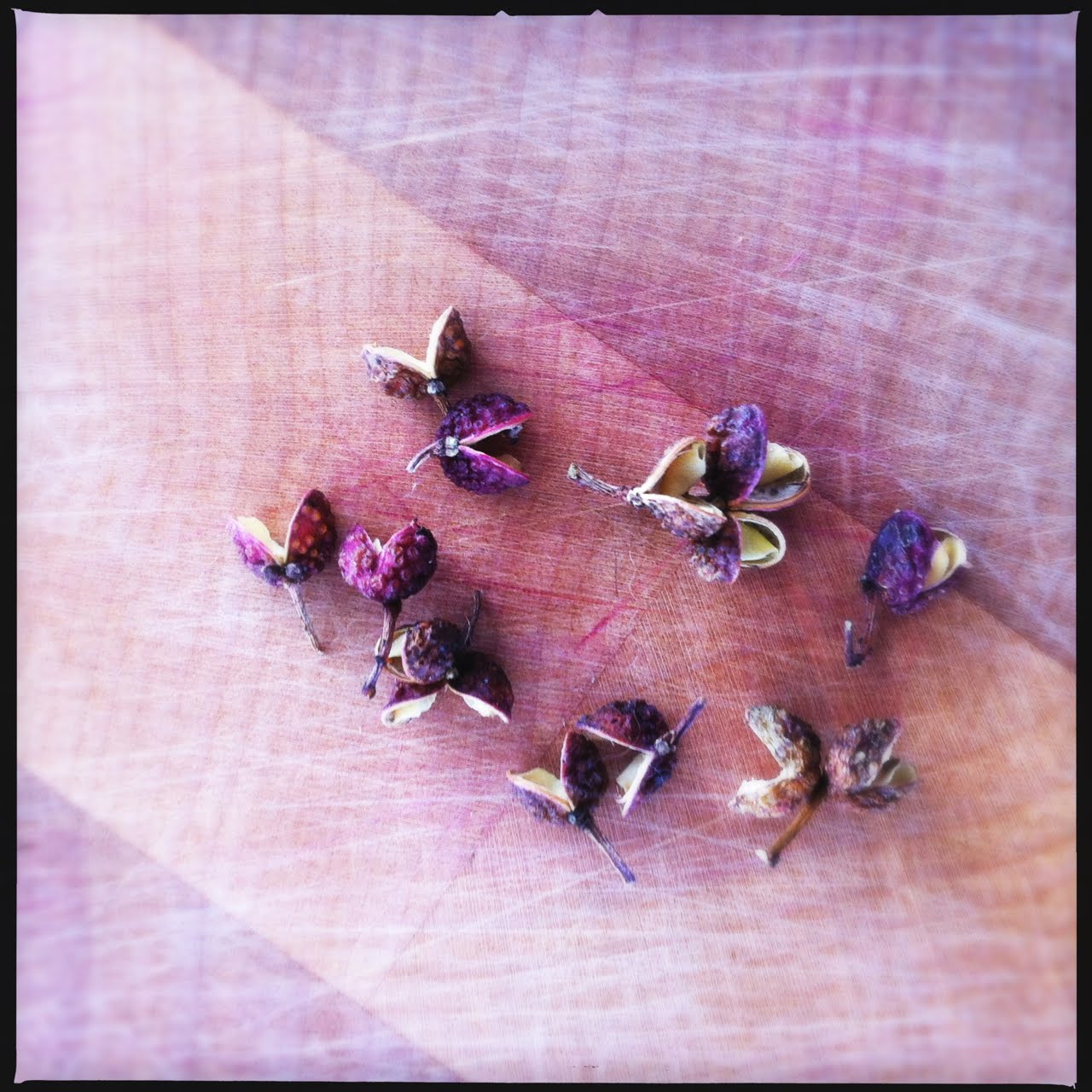 eaten though, in proper doses, it has a pleasant tingling effect which enhances both the heat and one’s ability to take the heat of accompanying chiles. it, in fact, is not a pepper at all, but the seedpod of a wild citrus variety.

if you don’t have a trip planned to bhutan, china, or another country in that ‘hood anytime soon, and you don’t have a chinatown near you, you could try this place. though i’ve never tried their szechuan pepper, i’ve had great luck with other spices i’ve purchased there. and by the description, they know what they’re talking about.

if you can’t get your paws on any this go round, you can omit it all together and you will still have a very lovely and exotic tasting chutney. you can just call it 4 spice kumquat chutney and no one will be the wiser. 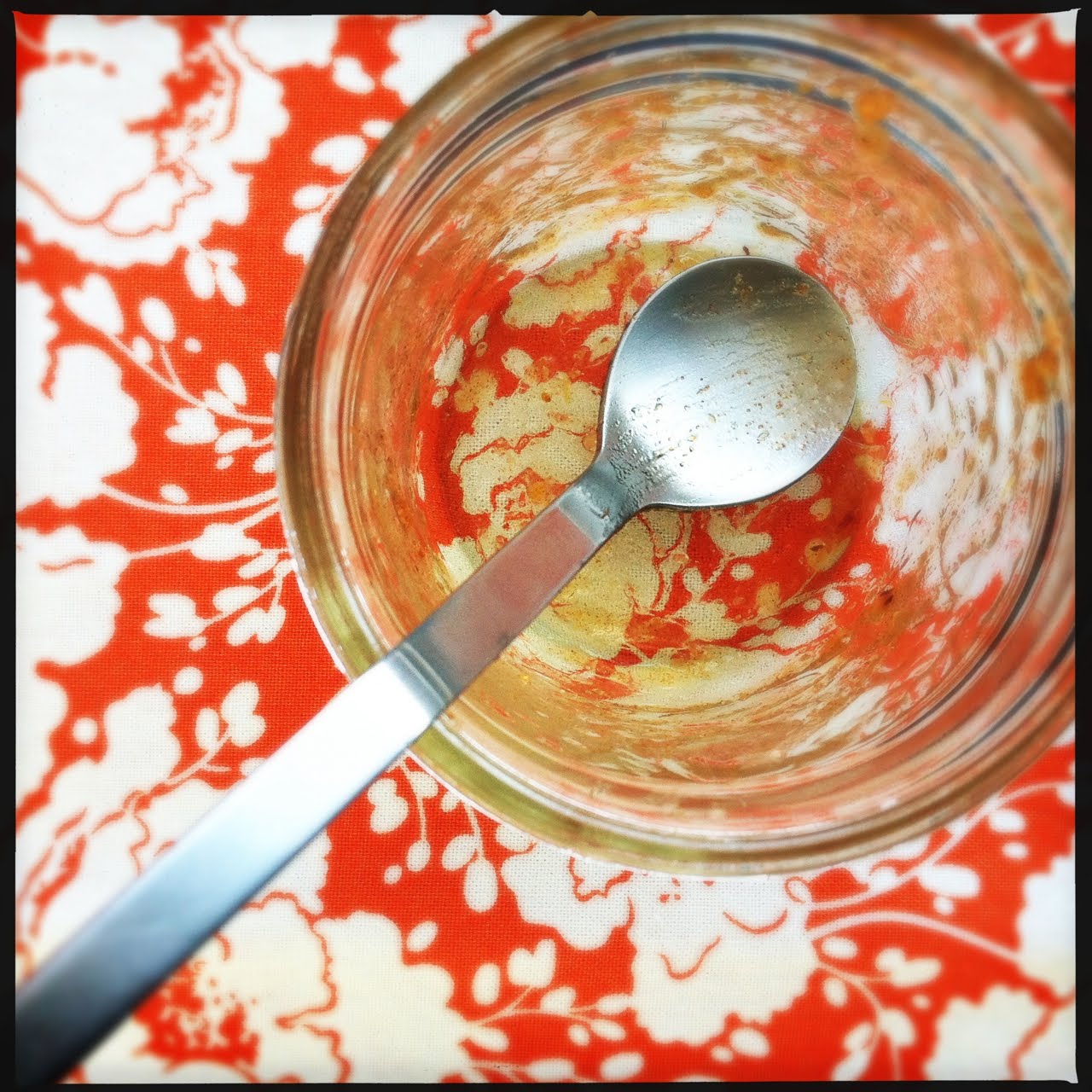 1. prepare your canning jars and lids. no need to sterilize as you will be processing for 10 minutes.

2. slice the little stem end off each kumquat, slice them in half lengthwise, quarter the larger ones, then slice each piece in half across. as you do this discard the larger seeds, don’t worry about the smaller ones they are edible. place them in your non-reactive (enameled iron or stainless steel) preserving pot as you go, so you catch all of the juice.

3. if you have one of these or a small food processor or blender, add the garlic and ginger and grind to a past. otherwise chop them both fine. add garlic-ginger paste to your preserving pot, along with the chopped onions.

4. use that same lovely gadget or a mortar & pestle to grind the chile, cloves, szechuan pepper, and cinnamon to a powder. leave the star anise whole. add the spices to the post along with the chopped dates, sugar, salt and white wine vinegar. heat on medium low until the sugar melts. then turn up the heat to medium high and bring to the boil.

5. once boiling turn the heat down a bit, just enough to keep things rolling at a steady boil. it should take 20-30 minutes for your chutney to cook down to the desired consistency. stir as you go, and stir more often as it begins to thicken. at 10 minutes of boiling, discard the whole star anise, if you leave it in too long, it will permeate the chutney and drown out the other spices.

you will know it’s done when you can run a wooden spoon across the bottom and the chutney hovers on either side before covering the bottom of the pan up once again. remember it will thicken upon cooling, so don’t let it get too thick while you’re cooking. as long as you can see the bottom of the pan clearly in the wake of the spoon your good.

6. hot water bath process filled jars for 10 minutes. chutneys are best if left to rest for 2-3 weeks before eating, and last a full 2 years in the larder without any change in quality.

this chutney is flavor-packed. it’s a winner on soft cheeses, in between buttery pressed bread and runny cheddar, and as a side to anything stir-fried up in a wok.