These crinkly little critters are not the loveliest things i’ve ever set eyes on. infact 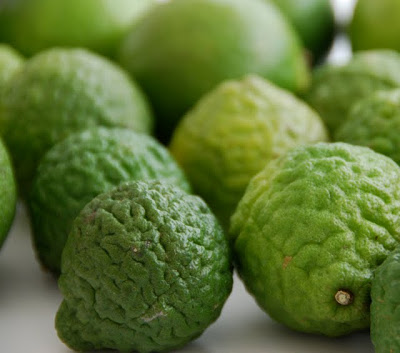 they never were quite ready for their close up. that said, and as i am sure your mother always told you: 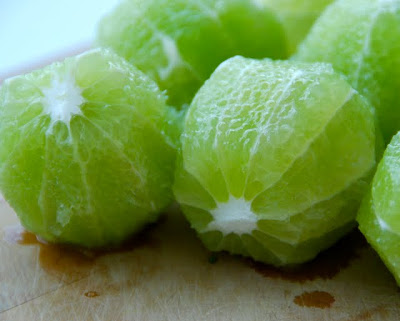 it’s the taste that counts. (you thought i was going to say it’s what’s inside that counts, didn’t you?)

well, let me get to the point: i used the outside of the ugly ones, and the inside of the pretty ones so as i said it’s the taste the counts. lime on lime shred marmalade

1. peel the kaffir limes thinly, leaving as much of the white pith behind as you can. because of the bumpiness of the rind, you will come away with some pith. that is ok, just make your best effort to have a pith free rind. i used a small paring knife. save the skinned limes for another use.

3. skin the ‘regular’ limes – discard skin or save for another use. cut the lime flesh in half down the length and slice each half in thin slices. try to catch as much of the juice as you can.

4. place sliced lime flesh, shredded kaffir lime peels and 7 cups water into a large non-reactive saucepan (no iron or aluminum). bring to the boil, then bring down to a simmer. simmer for approximately 1 hour – or until it reduces close to half and the lime shreds are tender.

5. while the limes are simmering, place sugar in a baking dish and put on low heat, around 130 degrees. bake until warmed through, approximately 20 minutes.

note: warming the sugar is a technique that i often overlook in jam-making. it helps to ensure that the sugar will dissolve leaving no hard granules in the cooked jam. i opted to do it here because of the amount of pectin in a citrus marmalade, figuring that the gel point would be reached rather quickly.

6. with the heat on low, stir sugar into the pot. once sugar is dissolved turn the heat up and bring to the boil.

testing ‘set’ or gel point: take the marmalade off the heat and place a teaspoon of marmalade on one of the frozen plates. place the plate back in the freezer, after 30 seconds take it out and run your finger through the middle. if properly gelled the marmalade will wrinkle around your finger.

this may take a try or two if you are new to jam making. every time you test, take the pot off the heat to prevent over cooking while you are testing.

8. once gel point is reached, take off heat, give it a stir, then let stand for 10 minutes – this allows the shreds of peel to settle and evenly distribute. 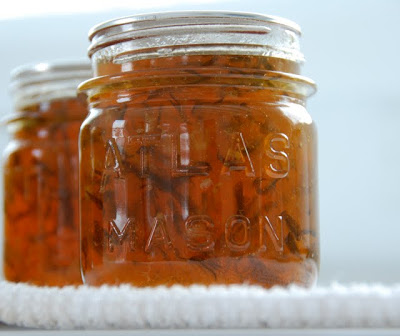 Do You Fear Cluttering Your Kitchen? Learn When to Replace What!