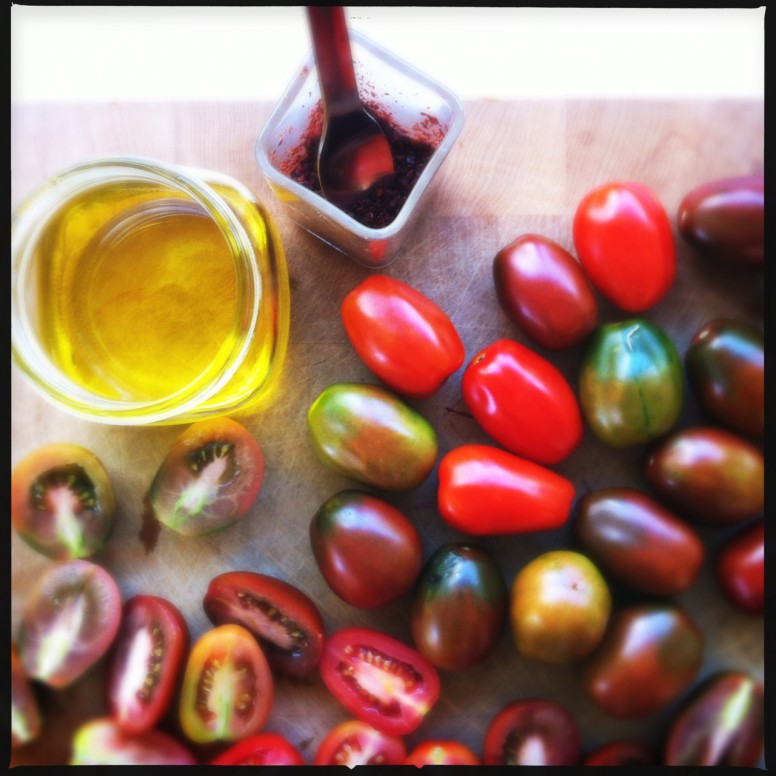 yes, yes, i’m still alive! it’s been over two months since last we spoke and there’s really nothing to say other than, when you have 110,000 people over for the weekend for a bit of music and fun, things get buzy.

photo bennett sell-kline not to mention the full month absence from my berkshire garden, and subsequent avalanche of tomatoes, chiles, all kinds-o’-roots, greens, beans, corn, herbs threatening to seed, and impending early october frost all waiting to greet me upon, or quite soon after, my arrival. whew!

there’s only so much one tigress can do. even with all of that hoopla going on betwixt my garden fence, there was no question that my first self-inflicted order was, SAVE THE TOMATOES!

i know roasting tomatoes and freezing them for later may not be a new idea for the savvy preservers out there. but it’s a very good one. and one that i would not think about skipping when saving my garden tomatoes. plus it’s dangerously easy, uses up a lot of tomatoes and the finished product is sweet, concentrated tomato flavor. great for pastas, bruschetta, adding to a pot of beans, winter stew, or egg scramble.

before i jump into my version inspired by my way too long ago trip to istanbul, let me say that the basic version that’s been floating around the interwebs for years now, the one of olive oil with a dusting of salt and a scant sprinkling of sugar is nothing to scoff at either. so go simple, or go daring like i do below.

these will save for a week or longer in the fridge in a jar, or up to 6 months in the freezer. they seem to get even better when frozen. which of course is a good thing.

a heaping pint will go well on one pound of pasta. though the smokey heat of aleppo, and sweetish tang of the pomegranate molasses in this turkish version makes it perfect for bits of toasted bread, either plain or with a slice or two of roasted eggplant nestled in between. zucchini could easily take the eggplant’s place. and feta works immensely crumbled atop either. oh, and try them drizzled over hummus – it will put you over the moon.

Pawnotes:
*please don’t even attempt to use dried crushed leaves like this unless you’ve grown and dried your own, or bought them fresh in season from your local farmer’s market and dried them on your counter top yourself. store the leaves whole in an airtight jar in a cool dark cabinet. crush only when needed. unless of course you have a very good source that i don’t know about, otherwise they’ll taste like dried bits of post-it notes.
**i know I’ve roared about this before but the absolute best source i’ve found for aleppo pepper is world spice market. a higher quality even then i found in turkey. what i’ve found in nyc, even from the most highly recommended shops cannot even compare. worth the order for sure.

5 Things You Should Know Before Ordering Seafood In Restaurants