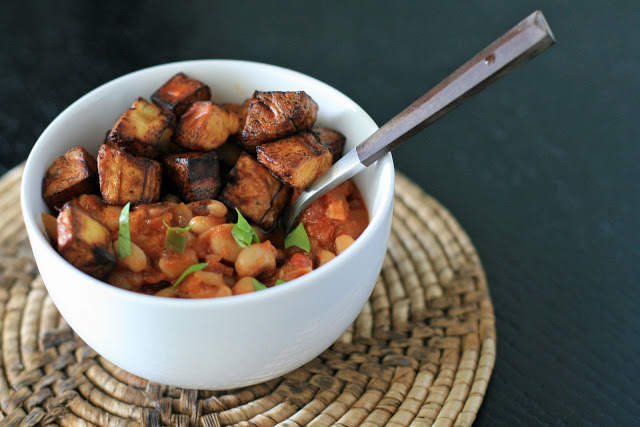 One can only imagine whether UB40 would have had the same success if they’d titled their hit song Red Red Stew as opposed to Red Red Wine.  Yep, I just pulled an Elaine (War and Peace, aka War, What is it Good For?  Anybody?  Anybody?).

Anyways, back to the food.  This is exactly the kind of recipe that I set out to find on my worldwide cooking adventure.  Hearty, healthy, vegan recipes.  No, I’m not giving up my dairy or meat just yet (giving up gluten was hard enough), but I’m all for trying to cut back.

Red-Red is a common Ghanaian stew that’s named for the combination of red palm oil and red tomatoes.  Red and red.  But red palm oil is hard to come by in a lot of parts, Hawaii included, so I substituted the red palm oil for some vegetable oil, paprika, and cayenne.  I guess that technically makes this Red-Red-Red stew.

My vegan friends, please don’t hold it against me that I caved and ended up using shrimp paste. It’s really easy to make this stew vegan- just use your favorite vegetable bouillon.  I really think you guys will like this one.

Also, unless you are a verified cilantro-hater, the cilantro is really essential here, adding a nice pop of fresh to the dish.  And yes, the plantain pillows do take a little extra time and effort but you’ll be rewarded with dreamy little packages of sweet starchiness that really go perfectly with the stew.

Rinse and drain dried black-eyed peas. Place in a medium saucepan, cover with several inches of water and bring to a boil. Reduce heat to low and simmer until tender, about 30 minutes. Drain and put aside.

Heat oil in a large saucepan over medium-high heat and cook the onions and garlic until they begin to brown. Add the ginger, paprika, cayenne, and Serrano peppers and cook, stirring, for several minutes.

Place the tomatoes in a blender or food processor and pulse several times. You want some chunks left. Add to the onion mixture along with the bouillon (or shrimp paste) and stir. Turn the heat to low and simmer for 10 minutes. Add the black-eyed peas and simmer another 10-15 minutes so that the flavors can meld. Add the cilantro, stir and simmer another minute.

Heat oil in a heavy saucepan over medium-heat to 350 degrees. In batches, place the cubed plantains into the oil and fry until golden.

Use as a topping for the Red-Red stew or eat as a snack.