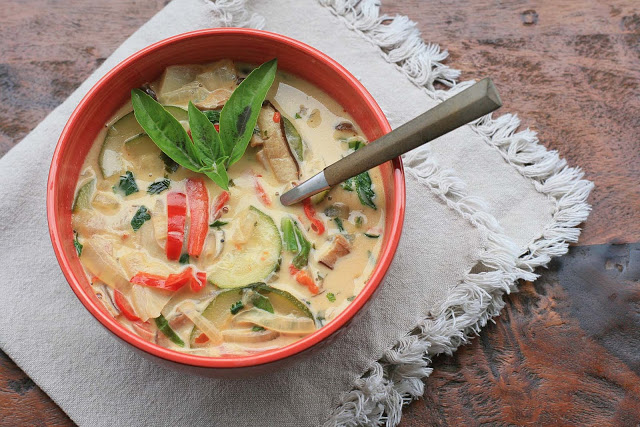 In my garden I have several Thai basil plants.  I haven’t used the herb all that often lately but my bee friends absolutely love those tall stems of purple flowers and so I keep it around for them.  Anybody who has picked up a pint of Haagen-Dazs (or newspaper) lately knows that there’s something of a bee crisis going on and so I’m happy to do my part to help the honeybees.  Maybe I should my consider my Haagen-Dazs habit as purely altruistic since they donate some of their profit to honeybee research? 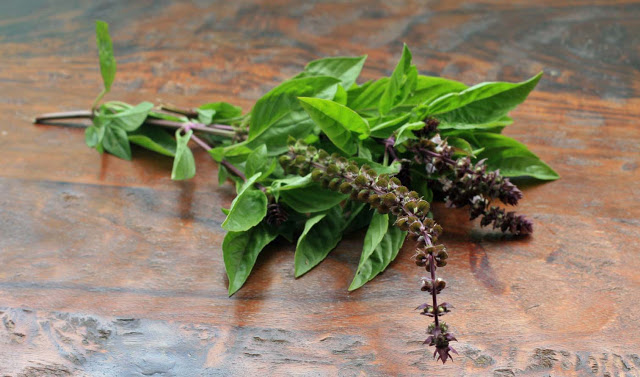 But anyways, I was thrilled to finally use some of my Thai basil and even more thrilled with the result I got from this healthy, vegan soup.  I would never have imagined that the broth could be so complex without fish sauce or oyster sauce.  It’s all thanks to the shiitake mushrooms.  While the mushrooms themselves add a nice meatiness to the soup it’s their lovely (but stinky!) soaking water that really makes this soup shine.

It’s chock full of healthy veggies, has a moderate amount of heat tempered slightly by the large dose of cilantro and Thai basil.  It’s so good that I’ve made it twice within a three day period.  The second time I was smart enough to make a double batch.

Heat the oil in a large saucepan over medium heat. Add the onions and garlic and cook, stirring, until the onion has softened. Add the crushed red pepper, ginger, and bell pepper and cook for another 2-3 minutes. Add the reconstituted mushrooms, all or their soaking liquid, the coconut milk and the zucchini.

Reduce heat to low, cover, and simmer for 5-10 minutes, or until the zucchini has softened. Stir in the bok choy, cilantro, Thai basil and cook, stirring, until the bok choy has begun to wilt. Season with plenty of salt and pepper to taste…. you’ll probably have to add much more salt than you’re used to because we’re not using any pre-seasoned broth.

How Does Reverse Osmosis System Work?