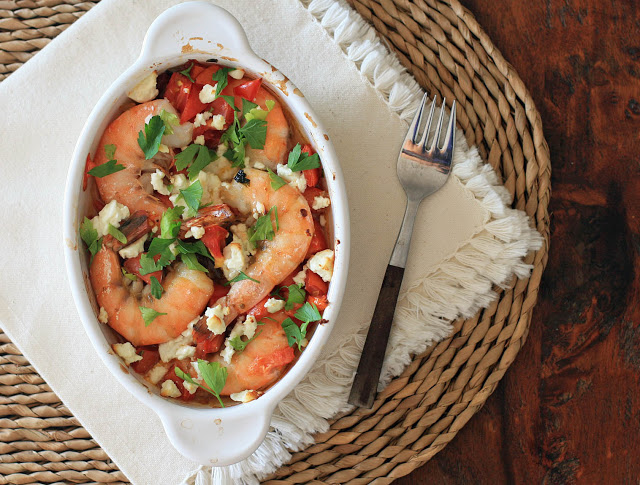 I can’t think of a better recipe to wrap up my first week of Greek cooking than this baked shrimp with feta.  Apparently it’s a very popular dish in the fish tavernas around Athens.  It’s relatively quick and easy to prepare and I think it would be a great rustic-meets-elegant meal for a dinner party.  I love the idea of everybody having their own individual serving of this pretty and colorful main course.

I also want to note that while it’s great hot out of the oven, it makes a killer cold salad as well.  I packed some of this for a North Shore picnic last holiday weekend along with the Greek Lentil Salad, and a garbanzo bean salad (recipe to come next week!).  So while I was eating this… 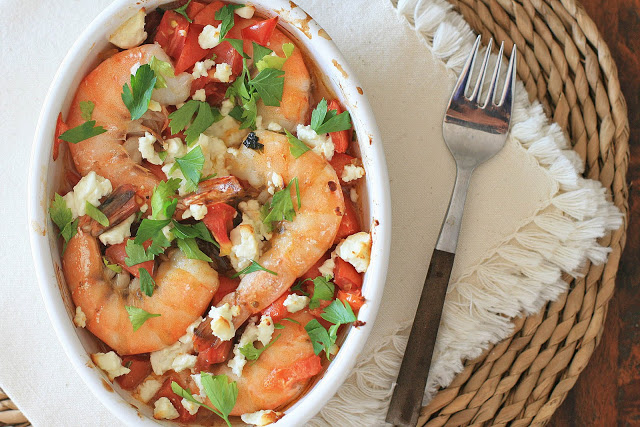 I was watching this… 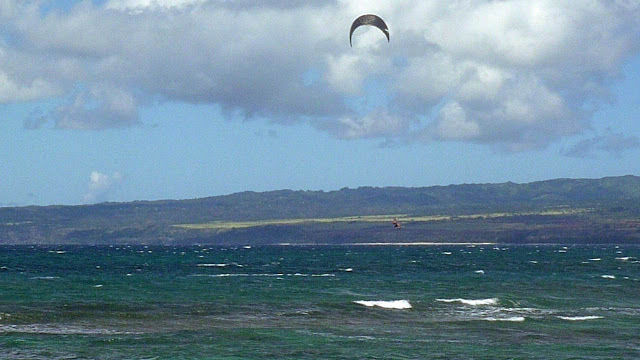 It’s hard to see, but there’s a kite surfer getting some pretty major air in the photo.  Sorry for the bad image quality; I used my cheapo point and shoot.  The water close to shore was impossibly blue and clear and it was fun to get some water time in… I’ve been working too much lately.  Anyways, I don’t know if it was the views or the food, but it was probably the best beach picnic I’ve ever had.  I’m sort of thinking the shrimp had something to do with it… 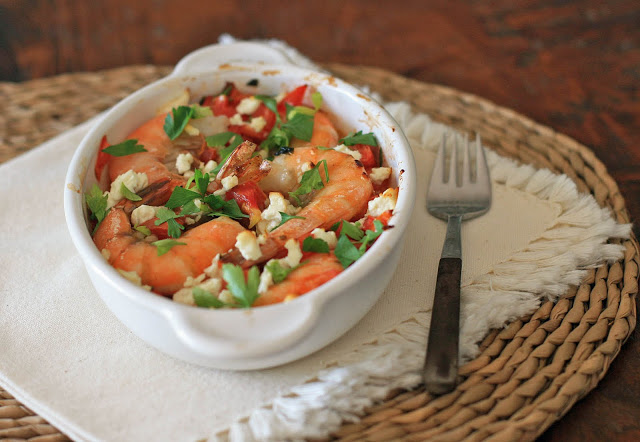 Preheat the oven to 350 degrees.

Heat 1/3 cup of the olive oil in a large skillet or saute pan and cook the onion over medium-low heat until very soft. Add the garlic, half of the tomatoes, honey, cayenne pepper, and cumin and raise the heat to medium and simmer until almost all of the liquid has evaporated. Add the oregano, about 2/3 of the parsley, and the white wine and season with some salt and pepper. Cook, stirring occasionally for about five minutes.

Divide the sauce between four individual baking dishes. Arrange the raw shrimp on top of the juice and then sprinkle with the remaining tomatoes and feta cheese. Drizzle on the remaining 2 Tablespoons of olive oil and bake until the shrimp are pink and all of the ingredients are heated through.

Remove from the oven and sprinkle with the remaining parsley. Serve hot, at room temperature, or even chilled, with lemon wedges.